Mecca, Saudi Arabia- Some two million pilgrims poured out of the Muslim holy city of Mecca on Sunday to begin the annual hajj, their numbers reduced on fears of the deadly MERS virus. 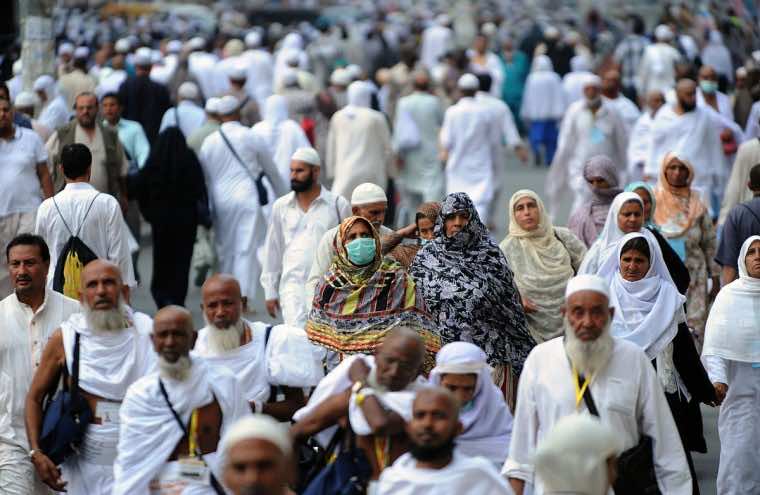 Mecca, Saudi Arabia- Some two million pilgrims poured out of the Muslim holy city of Mecca on Sunday to begin the annual hajj, their numbers reduced on fears of the deadly MERS virus.

Saudi Health Minister Abdullah Al-Rabia told reporters late Saturday that authorities had so far detected no cases among the pilgrims of the virus which has killed 60 people worldwide, 51 of them in Saudi Arabia.

The pilgrims moved from Mecca to nearby Mina by road, by train or on foot, the men wearing the seamless two-piece white garment tradition requires, the women covered up except for their faces and hands.

In Mina, they will pray and rest before moving on to Mount Arafat on Monday for the climax of the pilgrimage rituals.

The recently constructed electric railway is scheduled to carry 400,000 of the pilgrims taking part in the world’s largest annual gathering.

Saudi Arabia has deployed more than 100,000 troops to ensure the safety of the pilgrims and has warned it will tolerate no demonstrations or disturbances.

The oil-rich kingdom has also mobilised huge medical and civil defence resources to ensure the smooth movement of the pilgrims, around 1.4 million of whom come from abroad.

That figure is sharply down on last year’s 1.75 million.

Riyadh has imposed a 20-percent cut this year on the quota for pilgrims coming from abroad.

It has also slashed the number of domestic pilgrims by half because of MERS virus fears and reduced capacity resulting from multi-billion-dollar construction work.

The fact that the kingdom accounts for the overwhelming majority of MERS cases reported around the world has raised concerns pilgrims could be infected and return to their homelands carrying the virus.

But the authorities have said they are optimistic the hajj will pass without incident, given Muslims also go on lesser pilgrimages at other times of the year and there has been no problem.

This year’s minor pilgrimage season, or umrah, during the fasting month of Ramadan in July-August, passed off without any MERS outbreak even though millions of Muslims took part.

Experts are struggling to understand the MERS coronavirus, for which there is still no vaccine.

It is considered a deadlier but less transmissible cousin of the SARS virus that erupted in Asia in 2003 and infected 8,273 people, nine percent of whom died, and sowed economic chaos.

Like SARS, its is believed to have jumped from animals to humans. It shares the former’s flu-like symptoms, but differs by also causing kidney failure.