Valletta — Syrian refugees who survived after their boat capsized off Malta in the latest disaster in the Mediterranean say they were fired on by warring trafficking gangs as they set out on their perilous journey from Libya. 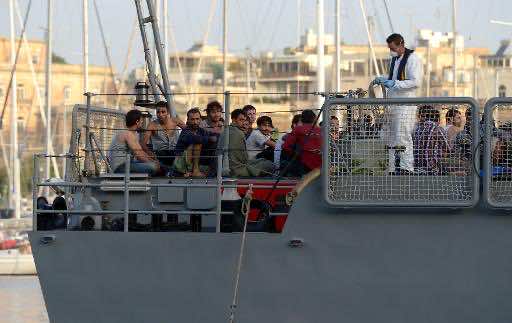 Valletta — Syrian refugees who survived after their boat capsized off Malta in the latest disaster in the Mediterranean say they were fired on by warring trafficking gangs as they set out on their perilous journey from Libya.

Thirty-three people perished after the boat sank on Friday, a week after another shipwreck off Italy left at least 359 dead, prompting Malta to warn that the Mediterranean was becoming “a cemetery”.

The boat, carrying up to 400 migrants, mostly Syrians, left the Libyan port of Zwara on Thursday, just 60 kilometres (37 miles) from the Tunisian border.

Survivors said Libyan militiamen shot wildly at their boat, leaving several people dead and causing the vessel to take on water and sink.

Syrian national Mohammed, 34, broke down in tears as he recalled his desperate search for his missing pregnant wife and seven-year-old daughter after he and his five-year-old girl managed to reach safety.

Mohammed told AFP he had paid a total of $4,800 (3,500 euros) for the trip to seek a better life in Europe, crossing through Egypt to Libya.

“When we got on the boat, Libyan militia put their machine guns to our heads and demanded more money. I had $5,000 and they took this too,” Mohammed said from a detention camp in Malta.

He said the Libyan gunmen followed them for four or five hours.

“All of a sudden, they started shooting at us and the boat. They injured two people with their bullets. All I could think of at that time was protect my two young children.

“Then they started shooting more bullets at the boat and they managed to puncture it. Lots of water started coming in. It was filling quite fast until we all ended up in the sea. I grabbed my daughter. She swallowed water but I managed to swim and we got onto a raft rescuers threw in the water,” Mohammed said.

Citing testimonies from some of those who survived the crossing, the UN refugee agency spoke of several injured passengers, saying shots were fired “perhaps by militiamen who shot to kill”.

Molhake al-Roarsan, 22, interviewed by Italy’s La Stampa newspaper, said three people were injured after being shot in the arms and legs.

He said he thought the attacks were related to a dispute between different groups of traffickers.

“There was a furious fight, screaming on the radio and on the phone with someone who demanded that we return to land, but the captain did not stop.”

“They were shooting in all directions, on board there was panic with people trying to protect each other,” it quoted one survivor as saying.

Once they reached Malta, the Tunisian captain was arrested after being recognised by survivors, according to media reports.

‘I lost practically all I had’

Ashur, a Syrian, said he and his family were fleeing the civil war in his home country. When the vessel capsized he managed to save his two-year-old daughter but lost his son and wife who was pregnant with twins.

“I lost practically all I had. What I have left to live for is my daughter who I will not let go out of my arms,” Ashur told AFP.

“We are just building a cemetery within our Mediterranean Sea,” he said.

The twin tragedies in the Mediterranean just days apart have prompted the European Union to call for sea patrols to cope with the flood of migrants knocking on its doors.

Italy has appealed to fellow EU states for help in managing the refugee crisis and wants migration to be put on the agenda of summit talks in Brussels later this month.

According to UNHCR estimates, some 32,000 migrants have arrived in Malta and Italy this year.