Rabat- The shutdown of the  American Government does not only cause damage to the hundreds of thousands of furloughed workers who have been sent into an extended vacation without pay. It also hurts veterans who are protesting  the closure of war memorials following the political impasse. 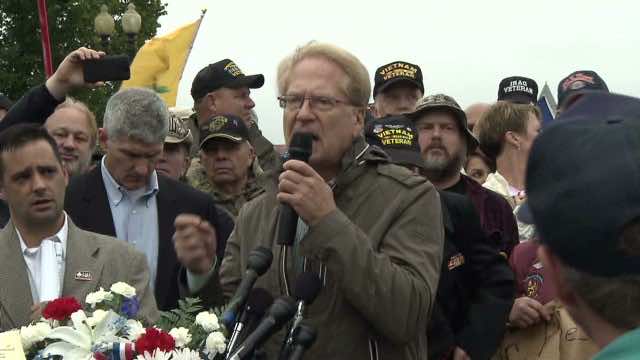 Rabat- The shutdown of the  American Government does not only cause damage to the hundreds of thousands of furloughed workers who have been sent into an extended vacation without pay. It also hurts veterans who are protesting  the closure of war memorials following the political impasse.

A Tea Party rallier joined by a group of veterans called for a “second American revolution” to topple Barack Obama because he is, as he claims, “ a president who bows down to Allah”.

The veterans pushed through the barriers of the World War II Memorial on the National Mall on Sunday to protest its closing due to the Government shutdown.

One protestor, Larry Klayman who runs a political advocacy group, “Freedom Watch”, said that the country is ruled by a president “who bows down to Allah”, and “is not a president of we the people”, according to the Huffingtonpost.

“Our greatest challenge—as we face a deep economic crisis, a government that spends our tax dollars like a drunken sailor, and a new Obama-Clinton regime that is using the economic crisis as an excuse to turn our nation into a socialist Euro-style welfare state,” he said.

He also urged Obama to “put the Quran down.”

“I call upon all of you to wage a second American nonviolent revolution, to use civil disobedience, and to demand that this president leave town, to get up, to put the Quran down, to get up off his knees, and to figuratively come up with his hands out,” he said.

“Our vets have proven that they have not been timid, so we will not be timid in calling out any who would use our military, our vets, as pawns in a political game,” Palin told the crowd.

The veterans later extended their protesting to the White House while carrying signs that say “Impeach Obama”.