NEW YORK CITY- A Libyan Al-Qaeda suspect who was snatched from Tripoli by US commandos and interrogated on an American warship, has been brought to New York to face trial, a prosecutor said Monday. 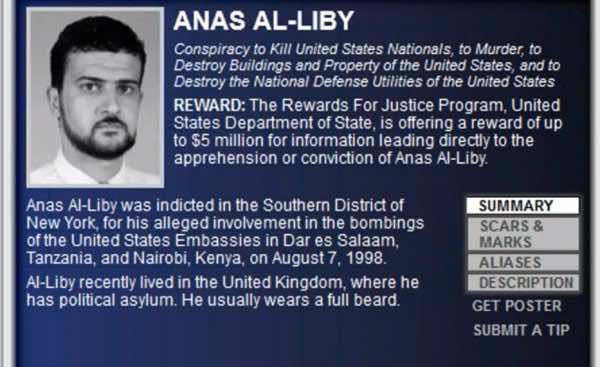 NEW YORK CITY- A Libyan Al-Qaeda suspect who was snatched from Tripoli by US commandos and interrogated on an American warship, has been brought to New York to face trial, a prosecutor said Monday.

Anas al-Libi arrived in the United States at the weekend and was brought directly to New York, where he has been under indictment for more than a decade.

Libi, a computer expert captured in the Libyan capital Tripoli on October 5, faces trial for the twin 1998 bombings of US embassies in Kenya and Tanzania.

“The government expects that he will be presented before a judicial officer tomorrow,” Southern District of New York Attorney Preet Bharara said in a statement.

Libi was believed to have been held and interrogated on a US warship in the Mediterranean after his capture in an operation denounced by Libya.

US President Barack Obama said last week that Libi “planned and helped to execute a plot that killed hundreds of people, a whole lot of Americans.”

“We have strong evidence of that. And he will be brought to justice,” Obama added.