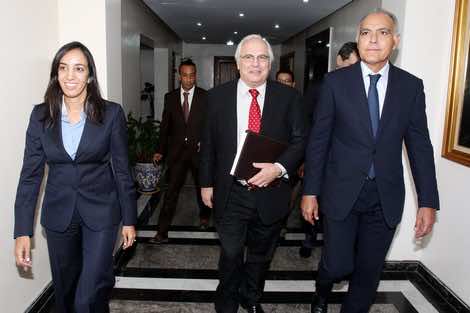 Rabat– The newly appointed Foreign minister Salaheddine Mezouar and Interior minister Mohamed Hassad held a meeting Monday with the UN Secretary General Special Envoy to the Sahara, Christopher, Ross who pays a visit to the region with the intention of re-launching the stalled negotiations process and pave the way towards a mutually-agreed solution to end the long lasting dispute over the Sahara.

The meeting between Mezouar and Ross was also attended by the newly appointed minister delegate to the minister of Foreign Affairs, Mbarka Bouaida.

Christopher Ross met earlier on Monday in Rabat with the speakers of the two chambers of the parliament, Mohamed Cheikh Biadillah and Karim Ghellab.

The Special Envoy will visit the city of Laayoune on Wednesday before heading to the Tindouf camps and then Algeria.

In a speech Friday delivered on the occasion of the inauguration of the new parliamentary session in the capital Rabat, King Mohammed VI criticized the lack of efficiency of Moroccan diplomacy, especially, the way the Sahara issue is being handled and the lack of foresight and strategic thinking in dealing with this nation’s fundamental issue.

“Most actors do not mobilize unless there is an imminent menace that threatens the integrity of our territory. It is like they don’t make a move until given the signal to do so. Instead of playing defense we have to force our adversaries to play it by taking charge and insight”, said the king to the bicameral parliament.

The king urged the parliament to “elaborate an efficient action plan, using all parliamentary tools, to continue defending our territorial integrity, by putting aside antagonisms between majority and opposition.”

“Members of parliament and local and regional elected members, mainly in our southern provinces, should shoulder their responsibilities as representatives of the region’s inhabitants and counter the country’s enemies,” the king noted.