Leaders of rival Palestinian factions Fatah and Hamas spoke via telephone on the eve of the Muslim Eid al-Adha holiday, stressing the need for reconciliation, a Hamas official said Tuesday. 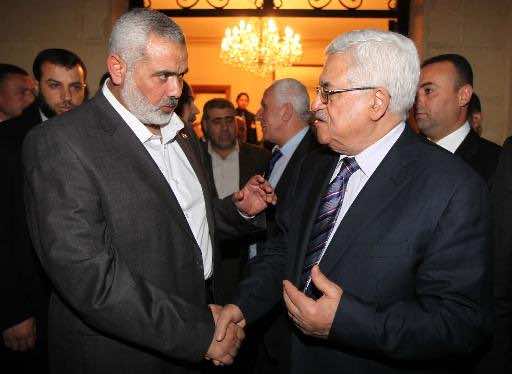 Leaders of rival Palestinian factions Fatah and Hamas spoke via telephone on the eve of the Muslim Eid al-Adha holiday, stressing the need for reconciliation, a Hamas official said Tuesday.

Gaza’s Hamas prime minister Ismail Haniya spoke to Palestinian president Mahmud Abbas of the “need for a return to national unity and an end to division” during the late night conversation, a Hamas official told AFP on condition of anonymity.

The Islamist Hamas movement and its rival Fatah, Abbas’s party that dominates the West Bank-based Palestinian Authority, have been at odds since Hamas’s takeover of the Gaza Strip in 2007.

Since signing an Egyptian-brokered deal in 2011 they have been attempting to heal their rifts.

The Cairo deal pledged to set up an interim consensus government of independents that would pave the way for parliamentary and presidential elections within 12 months.

But the implementation of the accords stalled over the make-up of the interim government, and a February 2012 deal intended to overcome outstanding differences was opposed by Hamas members in Gaza.

Hamas still opposes the appointment of prime minister Rami Hamdallah, choosing instead to recognise its own Haniya.

The Islamist movement says it is under severe economic pressure since the Egyptian army, which ousted Hamas ally Mohamed Morsi of the Muslim Brotherhood in July, destroyed hundreds of tunnels used to smuggle fuel and goods into the blockaded Gaza Strip.