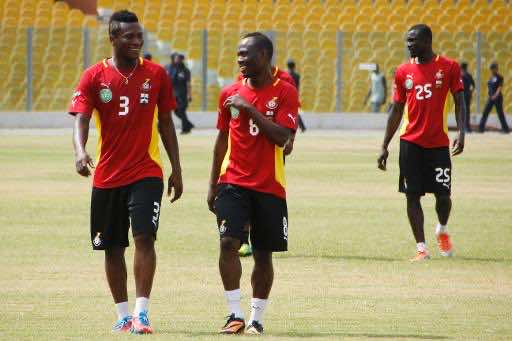 The ‘Black Stars’ took an early lead, were 3-1 in front by half-time, and another three goals left Egypt facing an almost impossible task on November 19 in Cairo.

Asamoah Gyan scored twice and Majeed Waris, Sulley Muntari and Christian Atsu once for the home team while Wael Gomaa conceded an own goal.

Mohamed Abou Trika was the lone Egyptian marksman, converting a spot-kick to pull the score back to 2-1 before the Ghanaians took total control.

It was a remarkable scoreline that not even the most partisan supporters of the ‘Black Stars’ could have imagined before the kick-off.

Midfielders Mohammed Rabiu and Kevin-Prince Boateng were also sidelined by injuries and a suspension ruled out play-anywhere Harrison Afful.

The ‘Black Stars’ line-up comprised footballers from nine countries, with Italy and South Africa providing two each, while eight of the Egypt line-up came from African champions Al-Ahly.

Egypt resembled nerve-riddled amateurs in the early stages before a near-capacity crowd at the 50,000-capacity Baba Yara Stadium in the second biggest Ghanaian city of Kumasi.

Gyan scuffed a chance after just 11 seconds and they could have been two goals ahead before he put Ghana in front on five minutes.

The former Sunderland striker picked up a loose ball, drove into the box and fired a low shot across goalkeeper Sherif Ekramy into the far corner.

Ekramy was working overtime, blocking a Kwadwo Asamoah shot and changing direction to push away a Waris header as Ghana dominated.

It was no surprise when the home side doubled their advantage on 22 minutes after dazzling dribbling from Chelsea midfielder Essien.

He took the ball past several opponents and when his charge was blocked by Ekramy, the ball struck shaven-haired Gomaa and rolled into the net.

Egypt, the only country to win all six Africa zone group games, were rattled and American coach Bob Bradley switched from a back four to three central defenders.

With five ‘Pharaohs’ in midfield, the visitors gradually came into the game and unmarked Mohamed Naguib wasted a chance by heading over at the far post.

It was a warning for the ‘Blacks Stars’ and Daniel Opare almost conceded an own goal before Egypt halved the deficit four minutes from the break.

But Ghana took just three minutes to regain a two-goal advantage with Waris nodding a Muntari free-kick across Ekramy and into the far corner.

Egypt needed to score first in the second half to get back into the game, but fell even further behind eight minutes after the restart.

An attempted bicycle kick from Muntari hit the turf and as the ball rose, Gyan nodded past Ekramy for his fifth goal of the qualifying campaign.

The goalkeeper was forced to retire injured soon after and when replacement Ahmed El Shenawy pulled down Waris, Muntari converted the penalty before Atsu completed the rout.