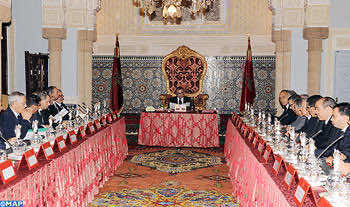 Rabat- King Mohammed VI chaired this Tuesday at the Royal palace of Rabat a ministers council.

Here follows the translation of the statement made by the spokesman of the Royal Palace, Abdelhak Lamrini, after the council:

“His Majesty King Mohammed VI, may God Assist Him, chaired on Tuesday 09 Dou Al Hijja 1434 of the Hegira, corresponding to October 15, 2013 at the Royal Palace of Rabat, a ministers’ council during which three draft organizational laws, general orientations of the 2014 finance bill, two decree projects related to military physicians and several international agreements were adopted.

As part of the implementation of the constitution’s provisions and the deepening of the rule of law, particularly as regards the setting up of institutions, the ministers’ council adopted three organizational draft laws.

The council also adopted the organizational draft law related to the constitutional court, which outlines essentially the court organization, composition and length of its members mandate, incompatibility situations applicable to them, in addition to procedures to set the court working and administrative organization modalities.

Was also adopted by the Council the organizational draft law pertaining to the parliamentary fact-finding commissions’ management modalities. The draft defines the commissions’ working and composition, as well as submission of reports on facts on which they were set up.

During the council, the economy and finance minister made a presentation on the finance bill general outlines, stressing that the draft comes in a national context marked by a good agricultural harvest, improvement of indicators of international new jobs in Morocco, increase of remittances of Moroccans living abroad and growth in tourism revenues, in addition to a sensible improvement of the volume of foreign direct investments.
The bill also comes in an international context of increased growth and volatility of raw materials prices.

The minister went on that the project seeks, in accordance with Royal instructions, to perfect the national institutional construction, speed the pace of major structuring reforms and promote growth and investment, while controlling the budget deficit. It also means to promote employment and consolidate social cohesion.

He underlined that the project’s objectives consist particularly in:

– Carrying the implementation of sectorial strategies.
– Gradually setting forth recommendations of the national encounter of the taxation system, mainly those related to the VAT.
– Implementing royal instructions on maintaining tax exemption for small and middle farmers.
– Supporting employment, mainly for the youth, by establishing a self-enterprise system and mobilizing potentials available at public enterprises and institutions.
– Guaranteeing stable revenues for the fund to support social cohesion.
– Reinforcing and expanding programs of the National initiative for human development and continuing to support the citizens’ purchasing power, mainly by subsidizing prices of staple materials.

After the adoption of the finance bill general outlines, the Council approved two decree projects related to military physicians. The first decree modifies and completes the statute of searchers-professors in medicine, pharmacy and dental medicine, including military searchers-professors who have administrative duties or are in a situation of secondment.

As part of Morocco’s respect of its international commitments and its involvement in bilateral and multilateral cooperation, the Council approved a package of international agreements pertaining mainly to the audio-visual sector, protection of personal data and measures to control money laundering, freeing, seizing and confiscation of criminally-earned money. These agreements are also related to migrant workers, national reserves, in addition to an agreement creating the Community of Sahel-Sahara states, signed last February, and a series of bilateral conventions dealing with judiciary and economic cooperation, promotion of investments, transport and energy.

In keeping with Article 49 of the Constitution and upon a proposal of the head of government at the initiative of the interior minister, King, may, appointed Khalid Safir, Wali (senior governor) of the region of Grand Casablanca, governor of the prefecture of Casablanca and Yahya Baya, governor of the province of Berrechid.