WASHINGTON - High unemployment rates, especially among youth, are not only an indicator of political unrest, but also predicted to increase in the Middle East and North Africa. 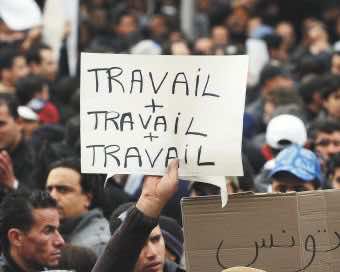 By
Samantha Stein
-
Samantha Stein is our Morocco World News’ correspondent based in Washington, DC.
Oct 15, 2013
Spread the love

WASHINGTON – High unemployment rates, especially among youth, are not only an indicator of political unrest, but also predicted to increase in the Middle East and North Africa.

According to Dr. Ibrahim Saif, Minister of Planning and International Cooperation for the Hashemite Kingdom of Jordan, “In order to match population growth, there is a need to create 75 million new jobs in the Middle East and North Africa by 2020, and not meeting the need now signals increases in unemployment in the future.”

How can this job growth be stimulated? There is a strong correlation between the number of small to medium enterprises (SMEs) in a given country and rates of job creation and GDP growth. In low-income countries, SMEs account for 30% of employment and 17% of GDP, while in high income countries they account for 50% of GDP and 60% of employment. “SMEs contribution towards labor generation is huge, contributing 25% in MENA and 50% in the United States,” added Dr. Ibrahim Saif.  If closing this SME gap, coined “the missing middle,” between low-income and high-income nations poses such potential for growth, then what stands in the way?

Acknowledging the important role of growing microenterprises into SMEs for a nation’s economy, Jaloul Ayed, Tunisia’s former Minister of Finance said, “There is no capital market for SMEs in a country like Tunisia.  Would this require huge financing? No, it would require good policy.” Ayed then added, “I am optimistic.” A number of components are needed to create an ecosystem in which SMEs can flourish, such as a strong legal system to protect investors, labor laws suitable for promoting a stable workforce, limited bureaucracy to keeping the cost of starting a business low, and perhaps most importantly a strong banking system to finance investments. Access to capital remains a devastating hurdle for microenterprises, typically comprised of less than ten employees, trying to grow their enterprises into SMEs, that is usually made up of up to 250 employees. While microfinance has become increasingly available for the former, the latter requires a riskier and larger investment often unavailable to those unable to offer collateral.

Last week, policy makers, economists, academics, and business leaders convened to discuss the Middle East and North Africa’s economic growth agenda at the MENA Investment and Entrepreneurship Conference, which was co-hosted by The Aspen Institute’s Partners for a New Beginning and the U.S. Chamber of Commerce. The conversation revolved around how to build a nourishing ecosystem for SMEs, and possible government initiatives to spur private sector lending.

Dr. Ibrahim Saif, Minister of Planning and International Cooperation for the Hashemite Kingdom of Jordan, presented one policy option, which is government funds dedicated to supporting SMEs placed in the central bank of Jordan for innovative ideas. Tunisia’s former Finance Minister, Jaloul Ayed, noted that seed funding partially in government funds would be a step in the right direction for supporting SMEs in Tunisia.

At the end of the day, however, funding for SMEs has to be made available from the private sector. The government can only go so far in supporting the SME ecosystem, and private sector innovations, made possible by the barrier shattering technologies of today’s high-tech world, need to bridge hurdles in lending and elsewhere. One lending hurdle in developing countries, where entrepreneurs are more likely to lack collateral, is that screening costs remain high for the more numerous, yet smaller loans required by the SME sector.

One promising innovation can decrease screening costs and predict which entrepreneurs are credit-worthy.  In fact, it does it so well that in the 20 countries where the innovation is currently used, partner banks have been able to triple their lending volume without increasing their risk.  This set of tools developed by the Entrepreneurial Finance Lab (EFL), a for-profit social enterprise that works in partnership with the Entrepreneurial Finance Lab Research Initiative at Harvard’s Center for International Development, could transform SME lending in the region if deployed there. EFL’s scalable credit application identifies high potential, low-risk entrepreneurs by asking a series of questions based on psychometric principles that assess character, beliefs, and attitude. EFL is one example of how solid research and innovation can overcome obstacles faced by aspiring entrepreneurs.

It is vital to support SME growth today for tomorrow. Huge demographic shifts are underway in the region as political transition in Libya, Tunisia, Egypt, and Yemen continues, and the worst refugee crisis since the Rwandan Genocide is emerging from Syria. In order to increase growth in the MENA region and beyond, we should focus on supporting SMEs, because SME growth translates into higher employment rates, greater political stability, and higher national GDP.  Governments should support the ecosystem necessary for SMEs to thrive and the private sector should drive investments and lending innovation.  The Arab Spring has taught us that the region is hungry for change and youth are driven to create that change. Are you optimistic? I am.

* Ayyagari, Beck, & Demirguc-Kunt. “Small- and medium-enterprises across the globe: a new database”