CAIRO- Amnesty International accused Egypt Thursday of unlawfully detaining and deporting hundreds of Syrian refugees, many of them women and children fleeing civil war at home. 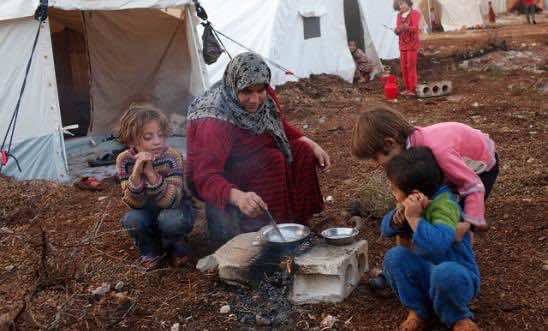 CAIRO- Amnesty International accused Egypt Thursday of unlawfully detaining and deporting hundreds of Syrian refugees, many of them women and children fleeing civil war at home.

“Instead of offering vital help and support to refugees from Syria, the Egyptian authorities are arresting and deporting them, flouting human rights standards,” Sherif Elsayed Ali, Amnesty’s head of refugee and migrants’ rights said in a statement.

“Most refugees lost their homes and livelihoods when they fled Syria. Failing to help and protect them is a stain on the reputation of Egypt and could seriously damage its image as a key stakeholder in the region.”

Ali said Egypt was failing “abysmally to meet its international obligations to protect even the most vulnerable refugees.” Amnesty said hundreds of refugees who fled Syria, including scores of children face, ongoing detention in poor conditions or deportation. It said the Egyptian navy has intercepted around 13 boats carrying refugees  from Syria in their attempt to reach Europe.

Quoting the UN refugee agency, UNHCR, it said 946 people have been arrested by Egypt while attempting the crossing, and that 724 remain in detention. Last week, Amnesty said 12 people drowned when a boat carrying refugees
from Syria sank off the coast of Alexandria.

On October 3, more than 300 people, including several Syrians, died when their vessel capsized trying to reach the Italian island of Lampedusa.

Egyptian authorities say the country has taken in more than 100,000 Syrian refugees, with some trying to leave for Europe aboard overcrowded ships.

The media has often accused refugees of backing the Muslim Brotherhood and of being involved in political violence that erupted in Egypt after the ouster of president Mohamed Morsi.

Amnesty said that, in most cases, those arrested are being kept in detention under orders of the national security agency, even after the public prosecution orders their release.

It cited the case of a nine-year-old boy from Aleppo arrested on a boat with a family friend and detained and denied access to his mother for four days.

Amnesty said that, during a visit to a police station in Alexandria, it found 40 Syrian refugees unlawfully and indefinitely detained there. Among them were 10 children — the youngest being one-year-old twins.

Several lawyers said they were prevented from representing refugees detained in police stations along Egypt’s Mediterranean coast, the group said.

Lawyers also told Amnesty that, in at least two instances, refugees were collectively deported to Damascus.

“Egypt should be helping Syrians get back on their feet, not hindering them at every turn,” said Ali.