WASHINGTON - The US government reopens for business Thursday after a two-week shutdown and a dangerous flirt with running out of cash to pay its bills and avert a calamitous, unprecedented default. 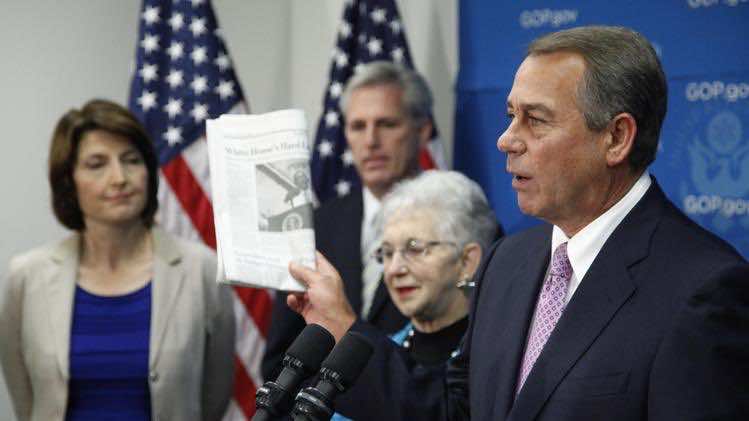 WASHINGTON – The US government reopens for business Thursday after a two-week shutdown and a dangerous flirt with running out of cash to pay its bills and avert a calamitous, unprecedented default.

Asian stocks rose amid the global sigh of relief, although European shares dipped in early trading.

The deal left conservative Republicans who were blamed for the shutdown heaped in scorn and with virtually no concessions to show for their effort, much less their original goal of derailing Obama’s signature domestic achievement, the health care reform known widely as “Obamacare”.

Hundreds of thousands of furloughed federal workers who had gone unpaid had orders to report back to the office.

National parks prepared to reopen their gates as did and monuments and museums, like the popular Smithsonian ones along vast green expanse called the Mall, not far from the White House.

The measure passed late Wednesday with less than two hours to go until the day the Treasury had warned it no longer had authority to incur more debt.

The last-gasp plan extended the borrowing authority but only until February 7. Lawmakers also reached agreement on funding the government, through January 15.

Obama signed the bill in the early hours of Thursday, shortly after the Congressional green light.

So amid the global exhale of relief, there was also a patent sense that bitterly divided Washington — which has endured several nail-biting spats of budget and debt brinkmanship in recent years — had simply kicked the can down the road, yet again.

“The Senate-made compromise buys only a short interval of peace,” The Washington Post said in an editorial.

The deals calls for a Senate-House of Republicans conference to come up with a more permanent fiscal fix. Recommendations are due December 13.

“Given recent history, though, it is all too possible that Congress will fail to agree and will deliver the country to the brink of another shutdown or default,” the paper said.

The New York Times said, “The Republican Party slunk away on Wednesday from its failed, ruinous strategy to get its way through the use of havoc.”

Even before the acrimonious battle reached its climax with the definitive House of Representatives vote after that of the Senate, Obama warned that Washington must stop governing by crisis.

US leaders needed to earn back the trust of the American people in the aftermath of the crisis, Obama said.

“We’ll begin reopening our government immediately, and we can begin to lift this cloud of uncertainty and unease from our businesses and from the American people.”

With a bitterly divided Congress locked in stalemate for a month, Senate Majority Leader Harry Reid worked behind closed doors with his Republican rival Senator Mitch McConnell to craft the compromise that had eluded Washington.

‘We’re just kicking the can down the road’.

The mood from many House Republicans was a begrudging acceptance of a deal many of them felt failed to address their desire to rein in outsized federal spending and roll back “Obamacare”.

House Budget chairman Paul Ryan, who voted against the bill, called it a “missed opportunity”.

“Today’s legislation won’t help us reduce our fast-growing debt,” he said. “In my judgement, this isn’t a breakthrough. We’re just kicking the can down the road.”

While the deal was welcomed on Wall Street, with the Dow Jones Industrial Average and the broader S&P 500 index up almost 1.4 percent Wednesday, the signs of a close-to-humiliating, last-minute bid to avert possible global economic turmoil were plain to see.

The International Monetary Fund’s managing director Christine Lagarde, who over the past week had pleaded with US lawmakers to come to their senses, praised them for taking the “necessary step” of lifting the debt ceiling.

After the agreement was unveiled, House speaker John Boehner bowed to the inevitable and admitted there were “no reasons” to vote against the bill, while maintaining that Republicans didn’t like its terms.

“We fought the good fight, we did everything we could. They just kept saying no, no, no,” Boehner said of lawmakers in Obama’s Democratic Party.

The legislation would allow government to borrow beyond its current $16.7 trillion debt (12.2 trillion euros) ceiling to meet its obligations.

Ratings firm Standard & Poor’s said the government shutdown had already taken $24 billion (17.5 billion euros) out of the economy and will cut growth in the fourth quarter significantly.

US officials and lawmakers are likely to seek to soothe rattled world markets and re-iterate that the full faith and credit of the United States remains intact.

The Fitch ratings agency on Tuesday underlined the seriousness of the situation by putting the US government’s AAA credit rating on a downgrade warning.

Major world powers have been left looking on in dismay, unable to do anything to protect their own economic interests, with many deeply invested in US Treasuries — hitherto seen as a safe haven.

China and Japan, which between them hold $2.4 trillion in US Treasuries, have expressed alarm and annoyance at the bitter political partisanship that has caused the weeks-long crisis.