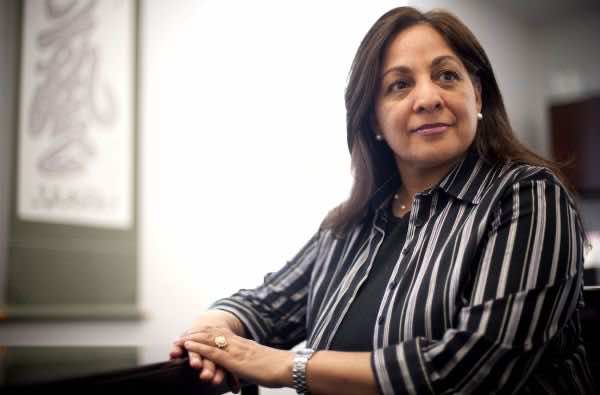 Daisy Khan, an executive director of the American society for Muslim advancement (ASMA), said that it was tough to be a Muslim anywhere around the world.

Khan gave an exclusive interview to Anadolu Agency in her New York Office.

Daisy Khan is widely and publicly acclaimed in American media, from CNN to New York Times and she is prized for overcoming some setbacks that are plaguing Muslims. ASMA is a well known non-profit organization dedicated to building bridges between Muslims and the general public in the US.

Being a Muslim in America

“So, for instance country that regards itself for all religious freedoms, whose constitution protect all religions gets coopted because a few extremists, basically see Islam as a enemy and the Muslims as suspects,” Khan said.

She pointed out this had a negative effect on the development of the Muslim community in America.

“Although we are protected by the constitution, it has an affect on day to day life of Muslims,” Khan told AA.

She also added that Muslims could still be easily detained, caught over in airports and be racially profiled.

“What has to be done is that Muslim community has to be seen as an asset not as a burden. If they are seen as an asset, we can work closely with the American government and law enforcement to change the way on how to keep America safe. Because, the primary goal is to keep our communities safe, to keep the country, and America and Americans safe,” Khan explained.

“We know our community very well and we know who is a main stream Muslim, and who are the people who may have extremist tendencies. We should be seen as an asset not as a suspect. And, that is what needs to change the way things happened in the past,” she told AA, saying Muslims should be more proactive.

Khan, however, emphasized that New York was the best place to be a Muslim, no matter what.

“There are estimated 800,000 Muslims just in the New York area, and I can tell you – I think I would like to live no where other than in New York. Because this is one of most exciting places to live in when it comes to Muslims. There is not a single cuisine that you can not find – not a single Muslim culture that you can not find here. The diversity – the Muslim community is so rich, that the entire global Muslim community is right here in New York City. The microcosm of entire Muslim community is right here in Manhattan. And you find it. So that is enriching not only New York but fellow Muslims, who get to meet Muslims from all over the world. It is like an annual Hajj – every day happening all year around in New York,” Khan said.

She also reminded that there were 50.000 Muslims entering America as immigrants every year, and many of them lived in New York first, because they had relatives and friends here.

“Most of the immigrants that are coming to this country very rarely know what the laws are of the country. They do bring their political affiliations and the fears of their own country,” Khan said adding that it was the role of community leaders who were already integrated in the US society and the institutions to help newcomers understand America well and move forward.

Asked whether this was going smoothly, Khan said, “It is very successful. There is lot of civic engagement going on in the Muslim community at a very robust level. But it is not enough.”

Khan said there were “huge efforts” going on to organize Muslims to vote in America and become a strong political block. Similar efforts are, as she said, were made in the interfaith dialogue with churches and synagogues in New York, in forming of alliances between American Muslims and people of other religions. They are “natural allies for the Muslim communities,” Khan said.

“There are Christians and the Jews who have been in this country and had very similar challenges who can share their success story with the Muslim communities,” Khan said.

“The challenge is that you can not create unified American Muslims, because is so much cultural and national diversity. You can not bring everybody together, and you can’t coordinate efforts because people are very much siloed in their own communities. They are separated from their language, their culture and even their political affiliation that they have,” Khan said.

She addressed the charge that the New York Police (NYPD) police infiltrated student groups and catalogued Muslim-owned businesses all across New York City, as well as in New Jersey and Connecticut, as Associated Press (AP) and other US media reported many times since 2011. Despite revulsion at the spying program within the Muslim community, the spying, as media reports, apparently still continues.