TUNIS - Tunisian security forces have killed "several terrorists" in an operation against an armed group suspected of an attack this week in which two policeman died, the interior ministry said Friday. 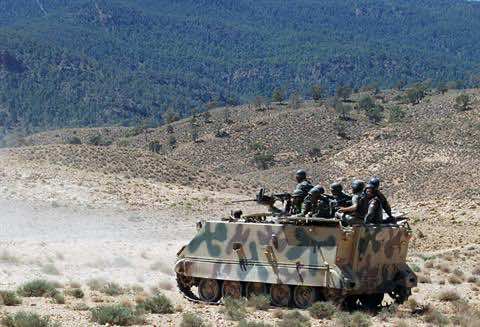 TUNIS – Tunisian security forces have killed “several terrorists” in an operation against an armed group suspected of an attack this week in which two policeman died, the interior ministry said Friday.

“Special forces from the interior ministry, the National Guard and the army took part in this operation. It began with air strikes and we are now in the terrestrial phase,” ministry spokesman Mohamed Ali Aroui told AFP.

“Several terrorists have been killed, but we can’t say how many as the operation is ongoing.”

Interior Minister Lotfi Ben Jeddou, speaking on private radio station Mosaique FM, said late on Thursday that the group was made up of around 20 to 25 fighters.

Two policemen were killed and another wounded in Thursday’s clash in the Beja region, 70 kilometres (45 miles) west of Tunis, where they were trying to verify the presence of an armed group sheltering there.

Islamist militancy has been on the rise in Tunisia since the 2011 revolution that toppled strongman Zine El Abidine Ben Ali and sparked the Arab Spring.

But the authorities had not previously reported that armed groups were active in the Beja region.

Since December, security forces have been tracking a group of militants allegedly linked to Al-Qaeda in the Chaambi mountain region along the Algerian border, with some 15 soldiers and police killed in the operations.

Despite air strikes and a major military offensive launched in July, the militants remain active, with clashes reported as recently as last weekend.

The interior ministry says Abou Iyadh, the leader of Tunisia’s main Salafist movement Ansar al-Sharia, and those suspected of killing opposition politicians ChokriBelaid and Mohamed Brahmi this year are holed up in the region.

Abou Iyadh, whose real name is Saif Allah Bin Hussein, is a former Al-Qaeda fighter in Afghanistan who is also accused of orchestrating a deadly attack on the USembassy in Tunis in September 2012.

Tunisia was plunged into political crisis in July when Brahmi was shot dead by suspected jihadist gunmen, in circumstances similar to Belaid’s murder six months earlier.

The ruling Islamist party Ennahda, which shot to power in 2011 parliamentary polls, is blamed by the opposition for failing to rein in the country’s jihadist movement.