Berlin - Despite the scathing criticism of the Moroccan regime by Al-Qaeda in the Islamic Maghreb (AQIM) in its recording released on September 12, this rhetoric does not present a threat to Moroccan political stability in the near term. Rather, the video seems designed to recruit youth eager to join al-Qaeda’s regional affiliate and to focus on local rather than international jihad, while also indirectly pressuring the regime to resolve the ongoing issue of terrorism—particularly the issue of Salafi jihadi detainees in Moroccan jails. 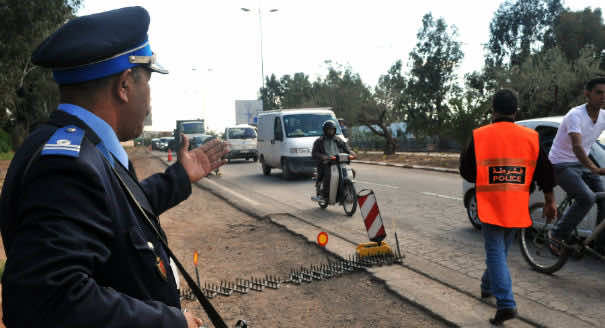 By
Mohammed Masbah
-
Mohammed Masbah is a fellow at the German Institute for International and Security Affairs (Stiftung Wissenschaft und Politik – SWP) in Berlin, working on the project “Elite change and new social mobilization in the Arab world.
Oct 18, 2013
Spread the love

Berlin – Despite the scathing criticism of the Moroccan regime by Al-Qaeda in the Islamic Maghreb (AQIM) in its recording released on September 12, this rhetoric does not present a threat to Moroccan political stability in the near term. Rather, the video seems designed to recruit youth eager to join al-Qaeda’s regional affiliate and to focus on local rather than international jihad, while also indirectly pressuring the regime to resolve the ongoing issue of terrorism—particularly the issue of Salafi jihadi detainees in Moroccan jails.

There is little question as to the video’s authenticity, particularly because AQIM itself has not denied it—as it has always been quick to deny responsibility for events not of its doing, including the Marrakesh bombing of April 2011. Particularly noteworthy in the 41-minute-long video, titled “Morocco: Kingdom of Corruption and Despotism,” is the high technical and production quality, as well as the sophistication of the content itself—aspects that apply to several recent al-Qaeda productions. This video includes careful political analysis drawing on Wikileaks documents, selections from the book Le Roi Prédateur (The Predator King) which depicts rampant corruption within the palace, clips from Al-Jazeera and other news outlets on the same topic, as well as statements by pro-Muslim Brotherhood intellectuals such as the Kuwaiti Abdallah al-Nafisi (at minute 14) criticizing the concentration of power and wealth in the hands of the few. In a break from tradition, the video carefully highlights figures from North African and Andalusian history, such as Youssef ben Tachfine and Tareq ben Ziyad, instead of those from the eastern Arab world, showing AQIM’s focus on local issues rather than the traditional international or regional issues on which it has previously sought to focus: the Arab-Israeli conflict and the wars in Afghanistan and Iraq.

In March 2013, another document was issued by AQIM along the same lines, discussing the need to recruit youth in Tunisia, Algeria, and Morocco to do battle in northern Mali and southern Algeria and to challenge French influence as well as the Algerian government. This signals a shift toward localization of jihad instead of its internationalization, which means a more local focus for AQIM, which recommends that its members stay in North Africa to recruit more followers instead of going to conflict zones like Syria, arguing that the local governments were trying to be rid of fighters by facilitating their travel abroad, thereby limiting the potential of action in their own countries.

In the video, AQIM refrained from calling for attacks within Morocco, with its emir, Abdelmalek Droudkel (also known as Abu Musab Abdel Wadoud) calling on youth to “migrate to God and His Prophet instead of migrating by boat” (at minute 39), which appears to encourage youth to join AQIM instead of heading to Syria for jihad or even to Europe for jobs and better lives. Recent instructions from the central al-Qaeda organization and its decentralized affiliates urge supporters not to target or clash with Arab regimes, especially those in which Islamists have come to power via elections, further suggesting that this video does not threaten Moroccan stability directly. Al-Qaeda sees such attacks as not being productive at this stage; rather, it has encouraged its members to join street protests in 2011 and to utilize the margin of freedom being created, either to topple regimes or to pressure them to offer genuine reforms. Although street protests have abated some, al-Qaeda’s strategy remains the same, as evidenced by the fatwa issued by Abu Munthir Shenkiti on Tawhid wal-Jihad’s website.

The idea of avoiding confrontation with regimes where Islamists came to power via elections is a proof of this shift in strategy; the group’s reasoning is not to enter in conflict with governments chosen by people. They also appear concerned with gaining more social support after the damage incurred by the 2005 and 2006 attacks on civilians in Iraq. This shows—beyond the concern to rehabilitate their public image—their pragmatism in choosing to adapt to changing circumstances. To that end, al-Qaeda’s leader, Ayman al-Zawahiri, hasargued that the group should exploit the Arab Spring to expand its recruiting by creating a civilian wing concentrating on religious propagation. This has subsequently led to the creation of Ansar al-Sharia within the Arab Spring countries—namely those with security vacuums, such as Tunisia, Libya, and Yemen. Civilians within Ansar al-Sharia are conducting a “hearts-and-minds” campaign based on charitable and religious work particularly on the outskirts of cities and towns.

Tunisia provides an example of the strategy of non-confrontation with governments where Islamists came to power through elections. Ansar al-Sharia in Tunisia (AST), which is ideologically affiliated with al-Qaeda, under the leadership of Seifallah Ben Hassine (known also as Abu Iyad al-Tunisi), first tried to provoke the Ennahda-led government and draw it into a fight—such as by attacking the U.S. Embassy in September 2012. This move drew a stern rebuke from the central and regional al-Qaeda leaderships. Then, when the Tunisian Ministry of Interior decided to ban the AST annual congress that had been scheduled to take place in Kairouan in May 2013, a bloody confrontation seemed likely, but a mediation effort by leaders in Ennahda and AST managed to prevent anger from getting out of hand; the two parties reached an agreement to postpone the conference instead. Since then, the level of escalation between the Ennahda government and AST has decreased: when the Tunisian Ministry of the Interior added AST to its list of terrorist organizations in August there was barely any action taken by the latter; instead they called for patience and avoiding confrontation with the government.

These pieces of evidence indicate that the latest video is more of a tool for AQIM’s local recruiting than a warning of impending attacks against the Moroccan regime, particularly since Morocco continues to be fertile ground for enlisting fighters. Estimates put the number of Moroccans fighting with the Syrian rebels between 200 and 700, including most prominently the leader of the Sham al-Islam movement, Brahim Benchekroun, who had been detained first in Guantanamo from 2002 until 2004 and later in Morocco from 2005 until 2011. Sham al-Islam, which rejects democracy and prioritizes fighting against the far enemy (the West) over the near enemy (Arab regimes), operates independently from al-Qaeda and Jabhat al-Nusra, and it consists mainly of Moroccan militants. This is the real future threat to Moroccan stability. An estimated 30 percent of the Moroccans fighting in Syria served time in jail under the Anti-Terrorism Law, and so have transformed from being purely ideological jihadists into actual combatants. Those who survive the civil war in Syria will return home with a wealth of combat expertise.

It’s no surprise that young ex-convicts who served time under the Anti-Terrorism Law are joining the jihad in Syria. Further radicalization in jails—from exposure to older leaders who had taken part in the Afghan and Chechen jihads—is one of the byproducts of the crackdown on suspected terrorists. Social and economic vulnerability—and the lack of support networks capable of providing post-prison rehabilitation—increase their feelings of exclusion and the appeal of joining the fight abroad.

The state’s heavy-handed approach to Salafi-jihadis further complicates the issue and overlooks the real threat. Morocco needs a comprehensive policy—that prioritizes preventing further radicalization through promoting the teaching of moderate Islamic concepts, engaging in dialogue with the Salafi-jihadis, and showing good faith by releasing detainees who did not commit felonies and show a desire to renounce violence—to address the eminent threat of returning jihadis. Yet such a policy will not succeed without a parallel long-term plan to address the country’s fundamental economic and political issues that remain at the root of popular disillusionment and disenfranchisement.