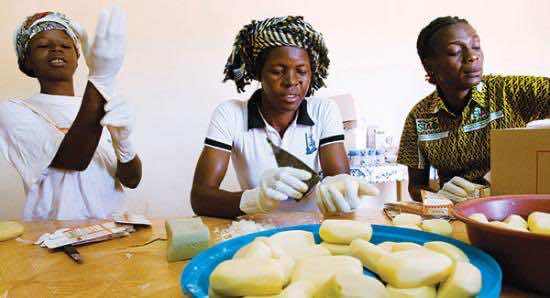 In a fancy Manhattan hotel in New York, women in colorful traditional African gowns make their way to one of the conference rooms. Their outfits provide a fascinating contrast to the grey and black business suits surrounding them. The crowd is diverse, but is gathered because of one thing: shea butter that comes from an African nut and is used in cosmetics as a lotion or moisturizer.

The Shea Butter Trade Industry held its first-ever conference in North America in May 2013. The occasion was an opportunity for African producers to mix with cosmetics industry giants such as L’Oréal and the Body Shop. The demand for shea butter has risen so much in recent years that African producers have started calling for fair prices for their labour.

Shea butter comes from the nuts of karité trees that grow in the Sahel region extending from West to East Africa, from Guinea and Senegal to Uganda and South Sudan. For centuries shea butter has been called “women’s gold” not only for its rich golden color (although shea butter can also sport a deep ivory hue, depending on the region) but also because it primarily provides employment and income to millions of women across the continent. Using traditional methods, women, often organized in cooperatives, harvest karité fruits. They then crush the nuts inside to extract the precious butter, which is boiled, cleaned, packaged and sold at the local markets or exported. Shea butter is non-toxic and edible, and can be used in cooking. But it is mostly used for cosmetic purposes.

“I have been making good money for my family selling shea butter,” Lucette Ndogo, a well-known shea butter vendor at the Marché Central in Douala, Cameroon, said in an interview with Africa Renewal. She purchases the shea butter in bulk from Burkina Faso and sells it for a profit to clients who have come to trust the quality of her products.

Antoine Turpin of IOI Loders Croklaan, a global producer of edible oils, told The New York Times that “shea [butter] is an important source of revenue to millions of women and their families across Africa. Empowering these women economically is crucial to the industry’s sustainability.” The New York Times says Turpin’s company alone purchases an estimated 25% of all shea nuts picked by women in West Africa.

With the demand for natural and organic products rising in the Western world, shea butter has become a hot commodity. The precious substance is used for many different types of cosmetics and skin care products because of its natural healing properties; people prefer it to the harsh chemicals, artificial colors and fillers often used in conventional cosmetics.

Shea butter is also used in food products such as chocolates. Confect-ioners use it as a cocoa butter equivalent to give chocolates a higher melting point and a smoother texture. The butter is used in popular chocolate bars such as Kit Kat and Milky Way.

According to The New York Times, a survey conducted in a village in Burkina Faso by USAID in 2010 found that for every $1,000 of shea nuts sold, an additional $1,580 in economic activities, such as reinvesting the money in other trades, was generated in the village. Shea butter exports from West Africa garner between $90 million and $200 million a year, according to the newspaper. The demand comes not only from major corporations but also from millions of entrepreneurs who hope to make a fortune in the distribution of this “women’s gold.”

With high demand come ethical issues, which often arise with products originating from the developing world, including Africa. Because of shea’s newfound popularity, the number of shea fair trade cooperatives and associations seeking a fair deal for African women has increased.

Fair trade is an organized social movement dating from the 1980s that promotes better trading conditions between producers from developing countries and buyers in the developed world. Proponents also seek to raise consumer awareness, believing that an educated consumer may be willing to pay more for goods if the producer gets a fair deal.

In order to receive fair prices for their products, commodity producers have to maintain certain levels of environmental and labor standards recommended by fair trade certification organizations such as Fairtrade International, World Fair Trade Organization, Faire Trade USA and Fair Trade Federation, to name a few.

The fair trade model appears to offer an improvement on the conventional trade model. Paying market prices for the commodity guarantees a minimum price to the producers. The industries usually associated with fair trade are coffee, cocoa, bananas, flowers, gold and other exotic products. Shea butter was not one of the most sought-after African commodities until recently.

Harriet Lamb of the Fairtrade Foundation says, “Fair trade addresses the injustices of conventional trade, which too often leave the poorest, weakest producers earning less than it costs them to grow their crops. It’s a bit like a national minimum wage for global trade. Not perfect, not a magic wand, not a panacea for all the problems of poverty, but a step in the right direction.”

Philip Booth from the Institute of Economic Affairs, a British think tank, sees things differently. He argues that “no clear evidence has been produced to suggest that farmers themselves actually receive higher prices under fair trade. Fair trade may do some good in some circumstances, but it does not deserve the unique status it claims for itself.”

Cosmetics retailers often portray fair trade shea butter as an exotic, traditional, authentic and ethical product encouraging female solidarity. The butter is produced by women in Africa and consumed mainly by Europeans and North Americans in search of “ethical” products. Because of the high number of companies and small entrepreneurs claiming to use fair trade shea butter in their products, it can be difficult to separate marketing strategy from real engagement.

L’Occitane en Provence, a French multinational cosmetics firm famous worldwide for its luxury products based on natural ingredients, prides itself on its use of fair trade shea butter in products including hand, body and foot creams. Indeed, for the company’s activities in Burkina Faso, its business model was recognized by UNDP in 2013 as one of the 12 most innovative and inclusive in Africa.

In order for more African women in the shea industry to reap the benefits of fair trade, the Global Shea Alliance, an association that promotes quality and sustainability in the shea butter industry’s support for rural African communities and women’s empowerment, organized the New York Shea Butter Trade Industry Conference. With the first New York fair trade event, the Alliance sought to provide a platform for exchanging ideas across the supply chain of collectors, producers, traders, industrial users and consumers of shea butter.

“The Body Shop has used shea for over 19 years and we are firmly committed to using our learning to build a sustainable shea sector,” said Mark Davis, the company’s director of community fair trade. “Being a member of the Global Shea Alliance is critical to achieving that goal.”

Other global commodities, such as coffee, have become associated with fair trade, and many stakeholders in the shea industry aspire to create that association for their product. Salima Makama, the Global Shea Alliance’s president, is convinced that the African women who came to New York to implement better strategies to empower themselves are well on their way to turning the shea butter export into “real gold.”