Tafraout- Newly-converted Arnoud van Doorn, a former anti-Islam film producer and a member of the Dutch right-wing Freedom Party, performed a pilgrimage to Mecca this year. 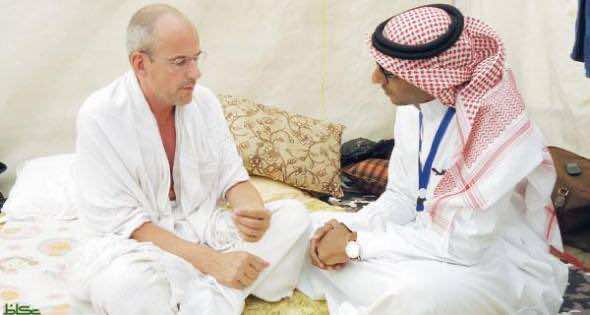 Tafraout- Newly-converted Arnoud van Doorn, a former anti-Islam film producer and a member of the Dutch right-wing Freedom Party, performed a pilgrimage to Mecca this year.

Upon embracing Islam, Arnoud indicated that he intends to produce a film in order to defend Islam and the prophet Mohamed.

Arnoud has stated that he experienced a number of enjoyable, spiritual, and uplifting moments during his recent pilgrimage to Mecca. He also reportedly shed some tears of repentance and glee, according to Okaz outlets.

“Islam has filled the emotional void I have long desperately felt. I missed many things before I converted to Islam,” Arnoud was quoted by Okaz as saying. “My previous life was futile and aimless.”

” Now with Islam, many things have changed in my life,” he added. Arnoud decided to perform the pilgrimage to seek repentance and implore Allah for forgiveness and absolution , reported the Yahoo news website.

During his previous visit to the Holy Land, he performed “Oumra” and acquainted himself more closely with the rituals of Islam. “I find tranquility inside my heart when I am near the Prophet Mohamed’s tomb,” he said.

Since he embraced Islam, he has been curious to read and learn a great deal about Islam, the religion of peace.

Despite the fact that Arnoud’s political party was infamous for attempting to tarnish the image of Islam and Muslims, the new convert has surprised many by his relentless new dedication to supporting the religion.