The world's largest tropical forest actually contains a lot of the same kinds of trees, according to research on the Amazon published this week in the US journal Science. 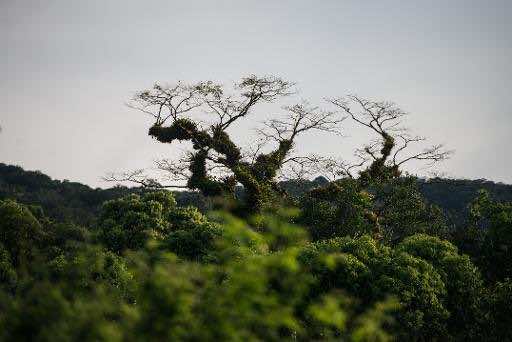 The world’s largest tropical forest actually contains a lot of the same kinds of trees, according to research on the Amazon published this week in the US journal Science.

Researchers embarked on an ambitious endeavor to catalog the types of trees seen most often in the vast Amazon basin, which spans parts of Brazil, Peru, Colombia, Guyana, Suriname and French Guiana.

There are about 390 billion individual trees in this expanse known as greater Amazonia, which covers an area about as large as the continental United States.

After compiling data from 1,179 forestry surveys, scientists discovered for the first time that the most common tree species in the Amazon is the palm Euterpe precatoria.

They also found that about half the trees in the entire rainforest come from just 227 tree species.

In other words, 1.4 percent of the total species make up about half the forest.

Some experts believe these trees are so common because they were actively cultivated by indigenous people in the area for millennia.

Others, according to co-author Nigel Pitman, a visiting scientist at the Field Museum in Chicago, “think those trees were dominant long before humans ever arrived in the Americas.”

The count also turned up new hints about rarities in the Amazon, suggesting about 6,000 tree species have populations of fewer than 1,000 individual trees.

That means they would qualify as threatened, according to the International Union for Conservation of Nature (IUCN) Red List.

But their elusiveness poses a challenge to conservationists, according to co-author Miles Silman of Wake Forest University.

“Our models tell us that species too rare to find account for much of the planet’s biodiversity,” said Silman.

“That’s a real problem for conservation, because the species at the greatest risk of extinction may disappear before we ever find them.”