Tunis — Tunisian forces have killed nine "terrorists" and seized two tonnes of explosives in the north of the country where policemen died this week in a jihadist attack, officials said on Saturday. 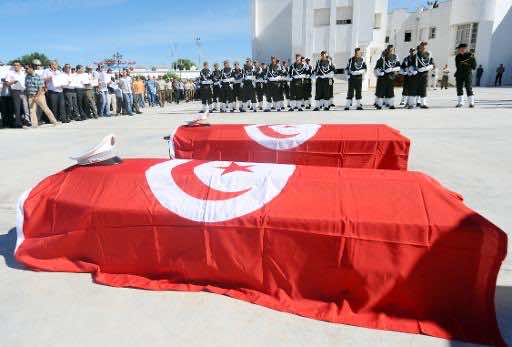 Tunis — Tunisian forces have killed nine “terrorists” and seized two tonnes of explosives in the north of the country where policemen died this week in a jihadist attack, officials said on Saturday.

The suspected “terrorists” were killed in the Mount Taouyer area of the Beja region, 70 kilometres (40 miles) west of Tunis, defence ministry spokesman Taoufik Rahmouni was quoted as saying by the official TAP news agency.

Another spokesman said troops had captured a member of the group during the military operation to hunt down a cell of some 20 suspected jihadists blamed for Thursday’s killing of the policemen.

The report did not provide further information about the explosives, and the ministry could not immediately be reached for comment.

Rahmouni said the operation launched Thursday was still underway on Saturday with the aid of reconnaissance flights, and that artillery strikes had been carried out in the region.

Since the 2011 uprising that sparked the Arab Spring, Tunisia has seen a rise in attacks by jihadist groups suppressed by former dictator Zine El Abidine Ben Ali.

Some 15 soldiers and police have been killed since December as they track militants allegedly linked to Al-Qaeda along the border with Algeria, but Saturday’s operation was the first of its kind in Beja, which is much closer to the capital.

The defence ministry has said it lacks the resources to combat militant groups and has struggled to contain them.

On Friday, in a sign of rising frustration over the costly fight against jihadists, protesting security forces drove Prime Minister Ali Larayedh and President Moncef Marzouki away from a memorial service for the policemen killed in Beja.

Tunisia has been locked in a political crisis since July, when prominent opposition lawmaker Mohamed Brahmi was shot dead by suspected jihadists, in circumstances similar to the murder of another opposition MP, Chokri Belaid, six months earlier.

The opposition accuses the ruling Ennahda party — a moderate Islamist group that swept the country’s first post-revolutionary elections — of failing to combat the rise in jihadist militancy, and the government has been paralysed for the last three months.

The two sides said Saturday they will launch a repeatedly delayed national dialogue on Wednesday in a bid to resolve the dispute.

The announcement came two weeks after Ennahda agreed to stand down by late October as part of a roadmap to form a government of independents.

The roadmap is also aimed at introducing a new constitution, electoral laws and setting a timetable for fresh parliamentary and presidential elections to end the political deadlock.