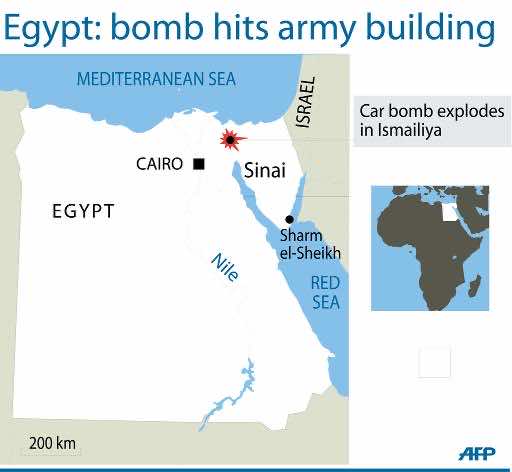 The blast destroyed part of the military compound’s wall and set fire to several cars in the area.

“This is the latest in a series of cowardly terrorist attacks by extremist elements against the people of Egypt and army installations,” said military spokesman Colonel Ahmed Ali in a statement.

He said six soldiers were lightly wounded in the attack.

Security officials said a second car bomb was found in the area, but experts managed to defuse it.

Witnesses said they heard gunfire around the time of the explosion.

More than 100 policemen have been killed across Egypt in attacks and clashes since then.

The military has been conducting an extensive operation in the Sinai Peninsula, east of the Suez canal to crack down on Islamist militants, who have killed dozens of soldiers and policemen.