CAIRO –  Six Egyptians were injured on Saturday in a terrorist attack outside a military intelligence headquarters in Ismailia, the Egyptian army said. 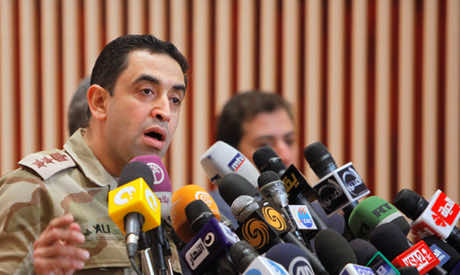 CAIRO –  Six Egyptians were injured on Saturday in a terrorist attack outside a military intelligence headquarters in Ismailia, the Egyptian army said.

An Egyptian military expert on Saturday predicted more attacks against military installations, following an explosion outside an intelligence headquarters in the canal city of Ismailia.

“These bombings aim to deliver a message that the State is incapable of protecting its facilities,” Alaa Ezz Eddin, the former head of the Egyptian Army’s Strategic Studies Center, told Anadolu Agency.

Six Egyptians were injured on Saturday in a terrorist attack outside a military intelligence headquarters in Ismailia, the Egyptian army said.

Ezz Eddin is confident that perpetrators of these attacks will not achieve their goal.

“We will endure for a while until we hunt down the masterminds of these attacks and stem terrorism as we did in the 1990s following the Luxor attack (in which 60 foreigners were killed in 1997),” he said.

The expert linked between the attacks and protests demanding the reinstatement of ousted president Mohamed Morsi.

“The surge in these attacks after Morsi’s ouster is a proof on this,” he said.

Morsi, Egypt’s first democratically-elected president, was removed from power by the military on July 3 after massive protests against his presidency.

The Muslim Brotherhood, from which Morsi hails, has denied any role in the attacks that ravaged the country following the overthrow of the Islamist leader.