ISLAMABAD - Pakistan's mainstream Muslim scholars have declined to comment on a "fatwa" (religious edict) issued by the Ulema Mujahiddin Shura of the Tehrik-e-Taliban Pakistan (TTP) threatening the media. 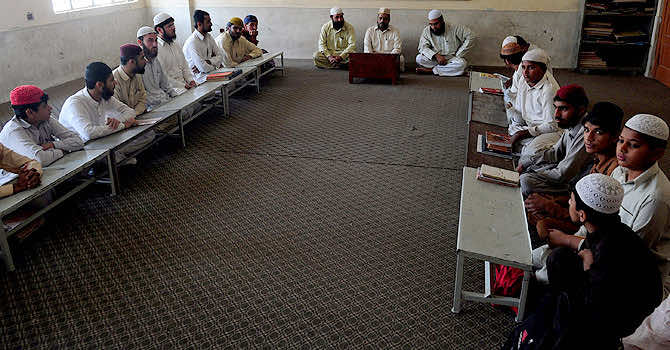 ISLAMABAD – Pakistan’s mainstream Muslim scholars have declined to comment on a “fatwa” (religious edict) issued by the Ulema Mujahiddin Shura of the Tehrik-e-Taliban Pakistan (TTP) threatening the media.

“There is no need to comment on these kinds of decrees whose issuers are unknown,” Mufti Muneeb-ur-Rehman, a veteran religious scholar and the chairman of the moon sighting committee, told Anadolu Agency.

“If the names of those Ulema who have issued this Fatwa are unknown then how can we comment on that.”

In an edict seen by AA, the so-called Pakistani Taliban Ulema (scholars) earlier today accused some media groups and journalists of being “engaged in distorting facts and propagating against Mujahiddin at the behest of anti-Islam forces.”

Citing different verses from the noble Quran and hadith (sayings of Prophet Muhammad), they warned these journalists to stop such practices or risk being killed.

“I haven’t seen or read this fatwa. Therefore, I do not find myself in a position to comment on that,” he told AA.

The same answer was given by Maulana Wali Raazi, a prominent religious scholar from the Dubendi school of thought, which Taliban follows.

“I will have to first see the fatwa. Only then I will be able to comment on that,” Raazi, a former minister for religious affairs, told AA.

Wazir, who works for a local Urdu language daily, is also a research analyst for the Islamabad-based Fata Research Center, which deals with local tribal affairs.

South Waziristan is a former stronghold of the TTP, an umbrella group of various Taliban groups operating in Pakistan.