Madrid — Barcelona missed the chance to equal the best ever start to a Spanish league season as they dropped their first points of the campaign in a 0-0 draw at Osasuna. 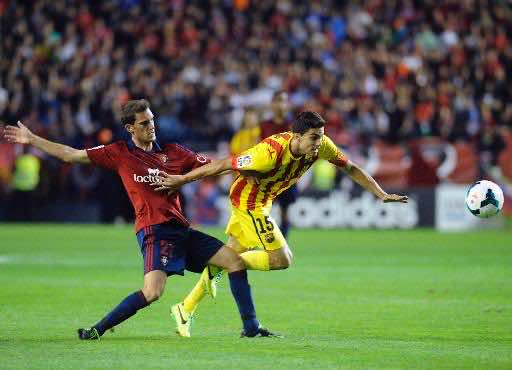 Madrid — Barcelona missed the chance to equal the best ever start to a Spanish league season as they dropped their first points of the campaign in a 0-0 draw at Osasuna.

With Lionel Messi starting on the bench, the visitors failed to make the most of their dominance in the first-half with Marc Bartra’s wayward header their only serious effort on goal.

Neymar and Cesc Fabregas then passed up great chances to put Barca in front at the beginning of the second period before Messi was finally introduced for the final quarter.

However, even the Argentine couldn’t open the door as Osasuna stood firm to prevent Barca scoring in the league for the first time since January 2012.

“With the performance of the team and the chances we had, normally it would be enough for Barcelona to win but today it wasn’t to be,” lamented Barca coach Gerardo Martino.

“I am very calm with the performance of the team, especially because Osasuna is a team that can cause damage in their stadium and we didn’t suffer at all defensively.”

Martino had decided to hand a surprise start to captain Carles Puyol after seven months out due to knee surgery, but left Messi on the bench as he returned from a thigh strain.

“Obviously, we were trying to win the game when Leo came on, but independent of the result, whether Barcelona were winning or losing, we always saw Leo playing 20-25 minutes,” said the coach.

Barca’s best chance in the first half came from a set-piece when Bartra headed over when completely unmarked from Xavi’s corner in stoppage time.

Neymar was inches away from finding the breakthrough nine minutes after the break but he just couldn’t reach Martin Montoya’s low cross on the stretch.

Fabregas then blasted over after being played in perfectly by Xavi.

With the chances beginning to arrive, Martino summoned Messi from the bench 22 minutes from time in place of Xavi.

The Argentine fired a warning shot wide with his first opening 12 minutes from the end, but Barca failed to create another clear sight of goal and had to settle for a draw.

A point was enough though to move Martino’s men to the top of the table as Atletico Madrid also lost their 100 percent record with a 1-0 defeat at Espanyol.

Thibaut Courtois’ own goal 10 minutes after the break handed Javier Aguirre’s side the three points against his old club to leave Atletico a point adrift of Barca in second place.

Real Madrid cut the gap on the leaders to three points ahead of their clash at the Camp Nou next weekend with a routine 2-0 win over Malaga at the Santiago Bernabeu.

Gareth Bale made his return to action for Los Blancos as a late substitute and won the penalty which Cristiano Ronaldo converted to seal the points after Angel di Maria had given Madrid the lead.

It was a much improved all round performance from Madrid, who were only denied a far more comfortable margin of victory due to a series of wonderful saves by Malaga keeper Willy Caballero.

“The game today was good, I liked the attitude of the team. We defended well, were more aggressive and compact,” said Madrid boss Carlo Ancelotti.

“We had opportunities to score more goals and I hope in the games to come we can maintain the same intensity.”

Bale had been kept in reserve from the start due to his lack of match practice, but Ancelotti believes he will be ready to start on Wednesday in the Champions League when Juventus are the visitors to the Bernabeu.

“He could start, it is an option that we have, I don’t think he will have any problems playing from the start. We will see what happens, but we have three days to make a decision.”

After being denied time and again by Caballero in the first-half. the opener arrived in fortunate circumstances less than 60 seconds after the interval.

Ronaldo just failed to get on the end of Di Maria’s in-swinging cross but the ball sailed into the far corner in any case.

Caballero continued to thwart the hosts as he denied Ronaldo on various occasion and produced his best save six minutes from time to turn Jese Rodriguez’s sweetly struck effort behind.

However, he was powerless to stop Ronaldo’s perfect penalty deep into stoppage time after Bale had induced a reckless challenge from Weligton.