Sydney - The Sydney Opera House, world heritage-listed as "one of the indisputable masterpieces of human creativity", celebrated its 40th birthday Sunday with a flotilla of lifesavers, Aboriginal dancers and a gigantic cupcake. 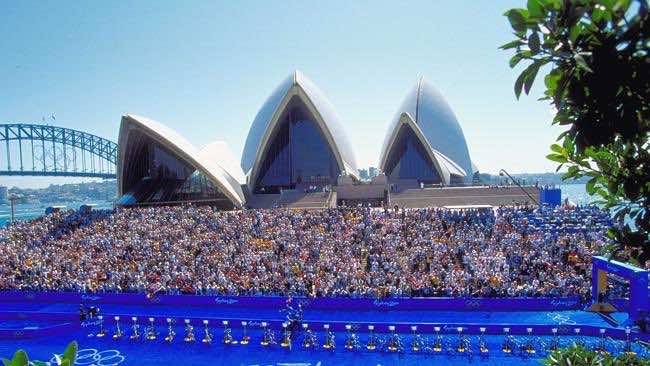 Sydney – The Sydney Opera House, world heritage-listed as “one of the indisputable masterpieces of human creativity”, celebrated its 40th birthday Sunday with a flotilla of lifesavers, Aboriginal dancers and a gigantic cupcake.

Huge crowds packed the steps for a distinctively Australian performance on the glittering harbourfront, where three generations of Danish architect Jorn Utzon’s family were the guests of honour.

It was a postcard-perfect day beneath the same cloudless blue skies that inspired Utzon’s winning design to build Sydney an opera house back in 1956 — the white sails drawn from his childhood in the Aalborg shipyards.

“A building like this happens once in a lifetime,” Utzon’s son Jan told revellers on Sunday.

“It is a unique Australian expression of will and enthusiasm and ‘let’s go do it’ kind of spirit.”

A crew of surf lifesavers wearing their famous yellow-and-red caps and costumes arrived at the Opera House’s Man O’ War steps on one of Sydney’s distinctive ferries, flanked by six of the association’s dinghies and two tugboats.

They were met and led up the red-carpeted steps by Aboriginal dancers where a traditional smoking ceremony was held to spiritually cleanse the site accompanied by an indigenous dance ritual and didgeridoo.

A giant cupcake topped with a model of the Opera House made from icing was carried onto the stage by the lifesavers, and Australian rocker Jimmy Barnes — frontman of Cold Chisel — led a rousing chorus of Happy Birthday accompanied by a navy brass band and school choir.

An Airbus A340 made a low pass over the site to cap celebrations.

The distinctive performance hall is one of Australia’s best-known landmarks and centrepiece of Sydney’s cultural scene, hosting some 2,000 shows every year and attracting 8.2 million visitors.

“As the most internationally recognisable symbol of both Sydney and Australia, it has become our calling card to the world,” said Governor of New South Wales, Marie Bashir.

Opera House chief Louise Herron said the huge crowds were a reminder “that the Opera House is, above all, the people’s palace.”

Utzon won an international design contest to build the harbour city an opera house in 1956 that attracted 233 entries from 28 countries, despite being relatively unknown in the architecture world.

His ambitious blueprint, drafted from photos and maps without ever having visited the harbour site, took 14 years and Aus$102 million to complete, funded by a state lottery.

It was one of the most difficult engineering feats ever attempted at the time, with Utzon envisaging a chamber with vaulted roofs unsupported by pillars or columns.

Custom-built French cranes were used to piece together the iconic sails segment by segment in mid-air, with pre-cast concrete ribs interlocking in an intricate jigsaw.

Some 1,056,006 individual tiles coat the exterior, custom-made from clay and stone. Utzon was inspired by Japanese ceramic bowls, imagining their pale matte finish would perfectly offset the blue of Sydney’s harbour and sky.

Protesters have scaled the building’s shell to unfurl banners about climate change and other causes, with one group painting “No War” in five-metre red letters on its uppermost sail in a 2003 demonstration against the US invasion of Iraq.

The Opera House was listed a world heritage site by UNESCO in 2007, the year before Utzon died.