CAIRO - Police were hunting Monday for those behind a shooting spree at a church wedding that killed four people, in the first attack targeting Christians in Cairo since the ouster of Egypt's Islamist president. 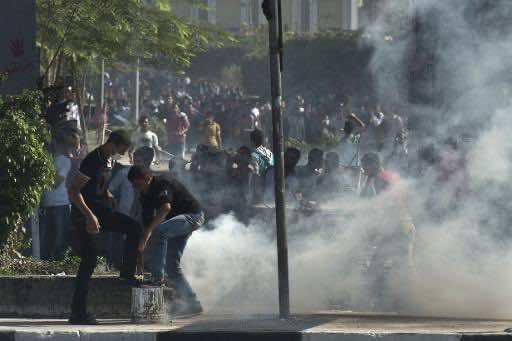 CAIRO – Police were hunting Monday for those behind a shooting spree at a church wedding that killed four people, in the first attack targeting Christians in Cairo since the ouster of Egypt’s Islamist president.

An eight-year-old girl was among those shot dead at the Church of the Virgin in Cairo’s working class neighbourhood of Al-Warrak, while 17 others were wounded in the late Sunday attack, officials said.

“There were two men on a motorbike and one of them opened fire,” as a crowd emerged from a wedding service, the interior ministry said.

Security forces were Monday deployed outside the church, whose walls were pockmarked with bullets. Women dressed in black gathered at the entrance to the church to mourn the dead, an AFP reporter said.

One worshipper Ayman Moussa told AFP there had been no security at the church since June, despite several attacks against Copts around the country in the wake of president Mohamed Morsi’s July 3 ouster by the army.

Ahmed al-Ansari, the head of ambulance services, said four people were killed and 17 were wounded, updating an earlier toll.

It was not immediately clear if all the victims were Coptic Christians.

Prime Minister Hazem Beblawi condemned the attack in a cabinet statement, calling it a “despicable criminal act,” and said security forces were searching for the assailants.

“Such terrible acts will not succeed in dividing Muslims and Christians,” he said.

Beblawi said police were investigating the circumstances of the attack and that he had asked authorities to provide emergency medical services to the wounded.

Egyptian Christians, the majority of whom are Copts, have been targeted since Morsi was swept out of power by the army amid mass protests against his year-long rule, and in particular since an August 14 crackdown by security forces on two Cairo camps of Morsi supporters.

Islamists were enraged by the deadly crackdown and accused Coptic Christians of backing the coup that toppled Morsi, who hails from the Muslim Brotherhood and was Egypt’s first democratically elected president.

This perception was fuelled by the appearance of Coptic Pope Tawadros II alongside army chief General Abdel Fattah al-Sisi when he announced on television Morsi’s removal from office.

Muslim leaders and other politicians were also present.

Rights groups say that Copts, who account for six to 10 percent of Egypt’s 85 million people, have come under attack mainly in the provinces of Minya and Assiut in central Egypt.

Earlier this month London-based Amnesty International said that more than 200 Christian-owned properties were attacked and 43 churches seriously damaged across the country since the August 14 crackdown.

In its report Amnesty International blamed Egyptian security forces for failing to stop “revenge attacks” against Coptic Christians after the violent dispersal of the pro-Morsi camps.

“In light of previous attacks, particularly since Morsi’s ousting on 3 July, a backlash against Coptic Christians should have been anticipated, yet security forces failed to prevent attacks or intervene to put an end to the violence,” the rights group said.

The Muslim Brotherhood has deplored Sunday’s attack and blamed it in part on the military-installed authorities.

“The military-backed authorities continue to turn a blind eye to deliberate acts of arson, vandalism and murder,” it said in a statement.

Egypt’s new government is engaged in a widespread crackdown on Islamists, jailing more than 2,000 since the storming of the pro-Morsi camps.

Morsi himself is in custody and is to go on trial November 4 over deadly clashes between his supporters and opponents outside the presidential palace in December 2012.

Most of the Brotherhood’s leaders, including its supreme guide Mohammed Badie, are also in custody.

An Egyptian court last month banned the Muslim Brotherhood from operating and seized its assets.