TRIPOLI - Two years after the killing of dictator Moamer Kadhafi, a chaotic Libya is haunted by the spectre of civil war, with heavily armed former rebels transformed into increasingly unruly militias. 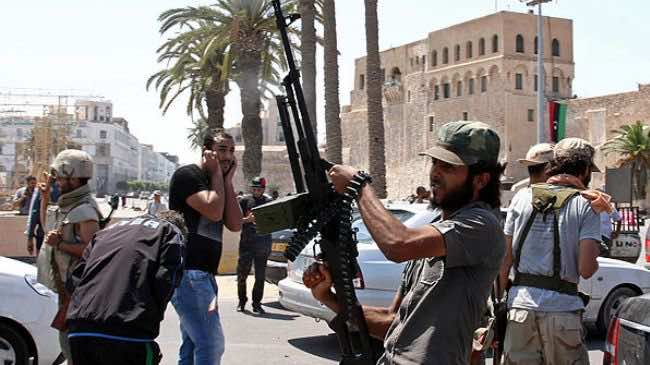 TRIPOLI – Two years after the killing of dictator Moamer Kadhafi, a chaotic Libya is haunted by the spectre of civil war, with heavily armed former rebels transformed into increasingly unruly militias.

When the rebels announced the “liberation” of Libya on October 23, 2011, ending Kadhafi’s heavy-handed 40-year reign, Libyans hoped another Dubai would emerge from their sparsely populated but petroleum-rich country.

Instead, the comparisons gravitate towards Somalia and Iraq, as the militants once hailed as heroes and backed by a NATO air campaign are increasingly seen as the source of all the country’s ills.

“We voluntarily contributed to the chaos that reigns in the country by taking up arms,” laments Muftah al-Bedri, a former rebel in his 50s who now works as a driver.

“We just have to resign ourselves to the situation and stay inside with our families, waiting for better days.”

On October 20, 2011 victorious rebels pulled Kadhafi from a drain pipe near the town of Sirte and executed him. They later put his body on display before
burying it in an unidentified location.

Libya held its first free elections in July 2012, but as in other countries swept up in the Arab Spring the new authorities have struggled to impose order
as long-suppressed extremists creep from the shadows.

Fred Abrahams, a special advisor to Human Rights Watch, argues that the lawlessness of the Libyan regime’s final days, when rebels allegedly massacred dozens of Kadhafi supporters, explains much of what has come since.

The failure to investigate “systematic executions” carried out by the rebels, including the killing of Kadhafi and his son Mutassim, “helped set the stage for the militia lawlessness in Libya today,” he wrote in a blog post.

“Impunity for those and subsequent crimes sent the message that Libya’s armed groups stand above the law,” he wrote, adding that some militias behind today’s chaos emerged after Kadhafi’s fall.

The state’s limited power was on vivid display earlier this month, when armed men seized Prime Minister Ali Zeidan and held him for several hours before releasing him.

On Sunday the head of an interior ministry anti-crime unit boasted that he was behind the “arrest” and that he was “proud” of it.

“We are swimming against the current,” Zeidan said Sunday, citing “several forces that hinder the construction of a security apparatus for the state.”

From rebels to racketeers

Charged with securing the country’s strategic installations and borders after the collapse of Kadhafi’s regime, former rebels have dipped into the deceased strongman’s vast stockpile of weapons and formed a loose patchwork of militias that act as army and police.

Some groups are autonomous and were formed on the basis of tribal or regional allegiances, while others have adopted ideological goals, with hardline groups like Ansar al-Sharia demanding an Islamic state.

The government has bought peace by paying millions of dollars to the militias in what increasingly looks like mafia-style protection money — when the payoffs have been cut the militias have not hesitated to attack state institutions, kidnap officials or besiege oil facilities.

Most of the heavily armed groups are officially affiliated with the defence or interior ministries, but in reality they obey their own commanders, many of whom scoff at Libya’s elected government.

The eastern city of Benghazi, cradle of the eight-month rebellion that overthrew Kadhafi, has grown increasingly chaotic since then, offering a grim picture of what might await the rest of the country.

The city has seen clashes between rival militias, scores of attacks on security forces and assaults on foreign missions, including the attack on the US consulate on September 12, 2012 that killed the ambassador and three other Americans.

“The situation could degenerate in the coming months,” one of the few remaining diplomats in Benghazi said on condition of anonymity, warning that the violence could spread to the rest of the country.