TUNIS - A senior member of Tunisia's ruling Islamist party accused the opposition of seeking to "destroy" negotiations between the two sides due to start on Wednesday by calling anti-government protests. 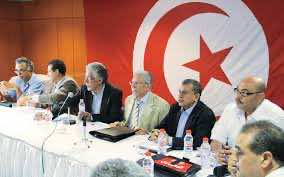 TUNIS – A senior member of Tunisia’s ruling Islamist party accused the opposition of seeking to “destroy” negotiations between the two sides due to start on Wednesday by calling anti-government protests.

“Ennahda and some other parties are engaged in positive preparations (for the planned dialogue), and then there are negative preparations taking place that aim to destroy the consensus,” said Noureddine Aarbaoui, the vice-president of Ennahda’s political bureau.

“One side calls for dialogue and the other for protests,” Aarbaoui told radio station Shems FM on Tuesday.

Tunisia has been in a state of political paralysis since the July 25 killing of opposition MP Mohamed Brahmi, an attack blamed on radical Islamists.

Under a blueprint agreed to this month, talks are due to take place between the bitterly divided factions and lead within one month to the resignation of Tunisia’s first freely elected government and the formation of a caretaker cabinet of technocrats.

The roadmap also envisages the adoption of a new constitution, electoral laws and a timetable for fresh elections.

But a coalition of secular opposition parties is planning demonstrations in Tunis on Wednesday to demand the Ennahda-led government’s immediate departure just as the national dialogue is finally due to begin.

“We need a clear process of dialogue and that requires a political, social and media truce,” said Aarbaoui, who called on Tunisia’s powerful UGTT trade union, which is mediating the talks, to persuade the opposition parties to abandon their planned rally.

A time and place for Wednesday’s talks has yet to be announced.

But the opposition umbrella group, which managed to mobilise large anti-government gatherings in the weeks after Brahmi’s assassination but has since seen its protests dwindle in size, hopes to muster a big crowd in central Tunis on Wednesday afternoon.

The League for the Protection of the Revolution, a controversial pro-government militia, has called for a rival demonstration in the morning, in the same central boulevard, raising the possibility of violence.

Within this context, Tunisian media on Tuesday voiced doubts about the imminent talks between the ruling Islamists and the opposition bringing an end to months of political deadlock.

Le Quotidien, a Tunisian daily, said the past few weeks had been marked by political “manoeuvres combining pressures, distractions and double speak, not to mention clashes and low punches.”

“Tunisians want to see in their politicians sincere, honest, committed individuals who believe in their work,” commented La Presse, urging the political class to renounce “all secretive activity and double language.”

Wednesday coincides with the second anniversary of the election of Tunisia’s National Constituent Assembly, just months after the uprising that toppled strongman Zine El Abidine Ben Ali and sparked the Arab Spring.

The assembly was tasked with adopting a new constitution within a year.

But the deadline has been repeatedly pushed back amid political wranglings between the Islamists, their coalition allies and the opposition, with the country lacking stable government institutions and a timetable for fresh elections, nearly three years after the revolution.

It has also been rocked by violence blamed on jihadist groups suppressed under Ben Ali.