TRIPOLI - A number of disabled former rebels from the war that toppled Libyan dictator Moammar Gadhafi, broke into the parliament building and vandalised some of it Tuesday, an MP told AFP. 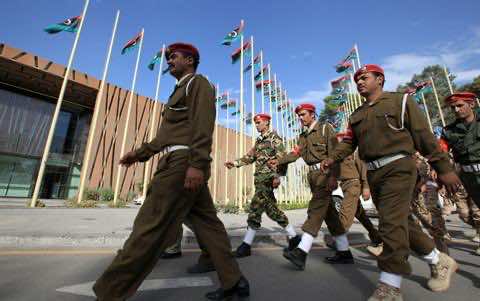 TRIPOLI – A number of disabled former rebels from the war that toppled Libyan dictator Moammar Gadhafi, broke into the parliament building and vandalised some of it Tuesday, an MP told AFP.

The protest came on the eve of the second anniversary of the rebels’ declaration of victory over Gadhafi’s forces, three days after he was captured and killed outside his home town Sirte.

MP Mohammed al-Khalil al-Zarruq said the protesters came from the town of Ajdabiya, a key crossroads between the capital and eastern Libya which was a major battleground in the 2011 war against Kadhafi.

“They got into the Congress chamber and smashed some fittings,” Zarruq said.

The MP said the chamber was empty at the time but deplored the “new assault on a state institution.”

This was the latest in a string of security breaches at the General National Congress building and came less than two weeks after the brief abduction of Prime Minister Ali Zeidan from his Tripoli hotel by disgruntled former rebels.

Diplomats and analysts have voiced mounting concern about the inability of the post-Gadhafi government to assert its writ over large swathes of the country.

Former rebels units, some of them sympathetic to Al-Qaeda, have refused to surrender their arms.

Desperate to forge a new army and police force to replace those crushed or discredited by the rebellion, the government has given some of the militia units varying degrees of official recognition, but its control over them is nominal in many cases.

One such unit made a string of arrests in Libya’s second city Benghazi on Monday evening that an army source said lacked legal authority.

Sources close to the brigade said those arrested were accused of involvement in a recent spate of assassinations in Benghazi of security and judicial officials who served under Gadhafi.

But an army source in the eastern city, which was the cradle of the 2011 uprising, cast doubt on the legal basis of the arrests.

“Those seized were just part of the migrant workforce — the announcement of the arrests is a bid to cover up the real perpetrators of the killings,” the source said.

The three Chadians were paraded on Libya’s privately owned Benghazi-based Al-Hurra television on Tuesday and accused of having fought as mercenaries for Gadhafi during the uprising.

The ousted regime did recruit personnel for its armed forces from abroad, particularly from sub-Saharan Africa, where Gadhafi built up a network of alliances during his 42-year rule.

But human rights groups say many migrant workers unconnected to the old regime suffered abuses in a misplaced vendetta by the victorious rebels that is still continuing.