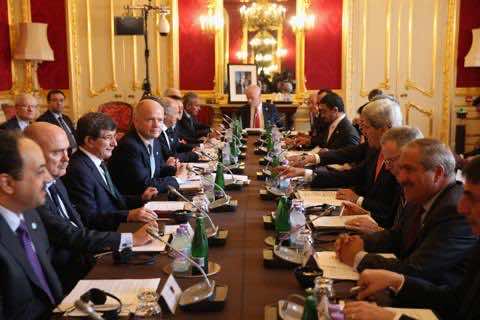 Arab and Western foreign ministers hold the “London 11” meeting of the Friends of Syria Core Group at Lancaster House in London on October 22, 2013

The so-called Friends of Syria leaders were meeting with rebel chiefs including the head of the Syrian National Coalition to persuade them to attend a major peace conference in Geneva next month.

Hague told a press conference after the meeting that they had agreed a “number of important steps”, while urging the coalition to commit itself to the Geneva conference.

“First we agreed that we would put our united and collective weight behind the UN-led Geneva 2 process which must lead to establishing by mutual consent a transitional governing body with executive powers,” Hague said.

“By definition mutual consent means it can only be agreed with the consent of the Syrian National Coalition — so Assad would play no role in that future government of Syria.”

He added: “Despite the enormous challenges faced by the Syrian opposition, we urged the National Coalition to commit itself fully to the Geneva 2 process, and lead and form the heart of any opposition delegation.”