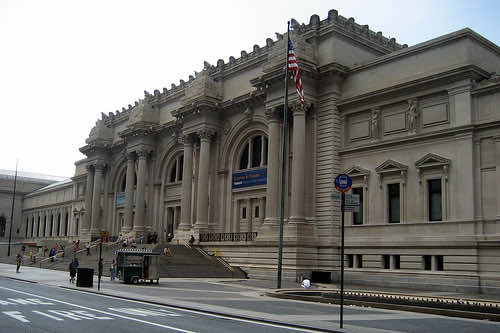 Agadir – If you happen to make it to New York, make sure you visit to the great museum on 5th Avenue which is nothing other but the great world renowned Metropolitan Museum of Art.

It is one of the great American museums that impact their visitors for a life time. I happened to have visited the Metropolitan or the Met as New Yorkers wish to call it some thirty five years ago.

I have always liked to visit these specific places of culture, knowledge and vision that are museums. They truly are three- dimensional encyclopedias illustrating interesting phases of recorded human history and creation. What actually refreshed my mind about this particular world of human endeavors in the fields of culture and civilization displayed in the Metropolitan Museum was the piece of news about the showcasing of the newly introduced Moroccan medieval court.

The court that a number of experts both American and Moroccan managed to create using fifteen-century knowledge and know-how is considered an architectural jewel within the Islamic art collection. In 2011, the Metropolitan Museum of Art opened new galleries devoted to art in Arab and Islamic lands. This great addition comes within the scope of an ongoing policy of adding new world class treasures and works of art to the greater ones that have already fallen into place within the framework of this great world culture and civilization jigsaw-puzzle that the Metropolitan museum hosts.

When you visit this New York architectural gem for the first time, you get impressed by its great beaux arts façade that thoroughly whets your appetite to learn more the works of art and treasures inside. Later when you escalate the stairs and make it into the main gallery and start your journey through other galleries you get the feeling that you are travelling through the entire history of human creation.  You are moved from a historical era to another just as you may turn pages of a history book.

In this manner you get a chance to see great Egyptian art, sculptures of kings and queens (Pharaohs) and other government dignitaries or simply those of ordinary people rowing on a boat or doing other daily chores. You get a chance to see beautifully preserved mummies and coffins ornamented with paint that did not fade a bit after four thousand long years. As you continue your journey and progress towards other galleries, you find yourself in either a Greek or Roman art gallery. The Greek art gallery hosts treasures of terra cotta with beautifully illustrated figures and designs along with sculptured figures from that era.

The Roman civilization was one that glorified power and domination. The gallery of Roman art features carefully and elegantly sculptured figures that demonstrate beauty and power. Some artifacts from the Roman era feature parade helmets and armor that go along those same lines of power, strength and thirst for domination. I can’t recall all the details about the art collections that the metropolitan hosted but what I remember for sure is that the last thing I managed to see during my visit was a painting by Picasso.

Lots of painting collections have of course been acquired and added to the ones the museum already owned. Great names in the field of painting from Europe and the US are represented through collections of works and paintings.  This museum has been operating for approximately a hundred and forty years. It was founded in 1870 and owes much of its success to the donations and contributions of the powerful New York financier JP Morgan. Much of the Egyptian art was donated by this man who organized and financed excavating trips to Egypt.

Later other powerful capitalist Americans contributed to the expansion and magnificence of this great New York institution through generous donations both in cash and in art collections. When I visited the New York Metropolitan Museum of Art, I was an eighteen year old American Field Service exchange student. Now after so many years, I still would love to catch a glimpse of its splendid treasures and great collections of human creation and get that feel for the valueless contributions that peoples from the four corners of the world have added to human civilization.

Nowadays, the Metropolitan holds under its roof around nineteen museums each specializing in a given era or type of human art and creation. Watching a recent video depicting the beauty and magnificence of the Moroccan court with its intricate architectural functionality and elaborate decorative designs, I could not but feel proud of the historical Moroccan contributions to world know-how in the fields of construction and art of living. The Moroccan masterpiece is another beautiful element added to the magnificent jigsaw-puzzle of human excellence and artistic creation.

In 2011, The Metropolitan Museum of Art opened the New Galleries for the Art of the Arab Lands, Turkey, Iran, Central Asia, and Later South Asia, which house the Museum’s renowned collection of Islamic art. A vital part of the installation is the Patti Cadby Birch Court, a Moroccan court built by a team of experts—from curators and historians to designers and craftsmen—over many months. Complementing the works on view, which span the past fourteen hundred years, the Moroccan Court provides an experience of space and architecture, and demonstrates artistic traditions that still thrive in the Islamic world. This video documents a marvelous journey from Fez to New York, and the creation of a twenty-first-century court using traditional, fifteenth-century methods.