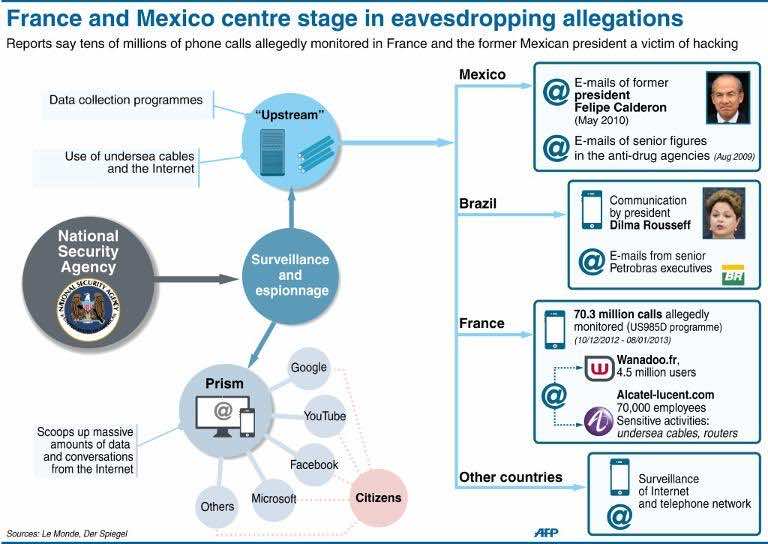 Meanwhile, the United States faced anger on yet another front in the unfolding saga, this time from Mexico.

The key US neighbor and ally to the south said it would investigate allegations that the United States spied on the emails of President Enrique Pena Nieto and his predecessor, in yet more fallout from leaks by former intelligence contractor Edward Snowden.

The French newspaper Le Monde reported Monday that millions of phone calls in France were monitored by the National Security Agency.

It followed up Tuesday by publishing details of US spying on French embassies around the world.

While France told the United States to stop snooping on its citizens, the US Director of National Intelligence, James Clapper, said in a statement Tuesday night that reports from Le Monde contained “inaccurate and misleading” information about America’s foreign intelligence activities.

Clapper, the US intelligence chief, said the Le Monde report that the NSA collected 70 million recordings of French citizens was “false”, but added in a statement that he would not discuss details of US espionage.

“The United States values our longstanding friendship and alliance with France and we will continue to cooperate on security and intelligence matters going forward,” he said.

The anger in Mexico City and Paris has put Washington in an awkward position with allies that collaborate on efforts from terror investigations to the war on drugs.

Pena Nieto ordered an “exhaustive” probe into claims that the NSA hacked his emails while he was running for office last year, as well as the messages of predecessor Felipe Calderon while in office.

The Mexican investigation will look into whether such spying indeed took place and if any local officials were complicit, said Interior Minister Miguel Angel Osorio Chong.

Since Pena Nieto took office in December, Mexico has “revised and strengthened” the security of the president’s voice and computer communications, he added.

The allegations that Calderon was spied on from May 2010 were reported by German weekly Der Spiegel on Sunday after a similar report by US journalist Glenn Greenwald last month that Pena Nieto had been targeted by the NSA.

The Mexican leader has said that US President Barack Obama pledged to launch an investigation into the alleged spying on his emails.

But Foreign Minister Jose Antonio Meade said he would summon the US ambassador over the latest claims and called the American response so far “unacceptable.”

In Paris, Foreign Minister Laurent Fabius used a breakfast meeting with US Secretary of State John Kerry to demand a full explanation of the latest revelations on the NSA’s spying program.

“I said again to John Kerry what (French President) Francois Hollande told Barack Obama, that this kind of spying conducted on a large scale by the Americans on its allies is something that is unacceptable,” Fabius said.

All the signs, however, were that France wants to defuse the row.

When asked if her country was considering reprisals over the NSA’s conduct, government spokeswoman Najat Vallaud-Belkacem replied: “I don’t think there is any need for an escalation.

“Our confidence in that has been hit but it is after all a very close, individual relationship that we have,” she said.

It came a day after the newspaper said the NSA had monitored more than 70 million phone communications in France between December 10, 2012 and January 8 this year, apparently targeting business and political figures as well as terrorism suspects.

Obama has already initiated a review of how America gathers intelligence with a view to addressing concerns over citizens’ right to privacy, officials say.

US officials have argued that intelligence acquired from phone monitoring can benefit all of Washington’s allies in fighting terrorism.

Most commentators were not surprised that the United States was conducting intelligence operations in France.

“It doesn’t mean it is not very serious, and the Americans must explain themselves, but this has all been known about for a very long time,” said Christian Jacob, an opposition lawmaker.

In Mexico, the opposition and analysts said the government’s initial response was soft.

“We expect a very strong protest from the foreign minister to the US government and a formal and firm request that the (US) investigation accelerate,” said the president of the lower house of Congress, Ricardo Anaya of Calderon’s conservative National Action Party (PAN).