Sydney- Australian researchers have found minuscule nuggets of gold hidden inside the leaves of eucalyptus trees, in a discovery they say could help prospectors discover new deposits of the precious metal. 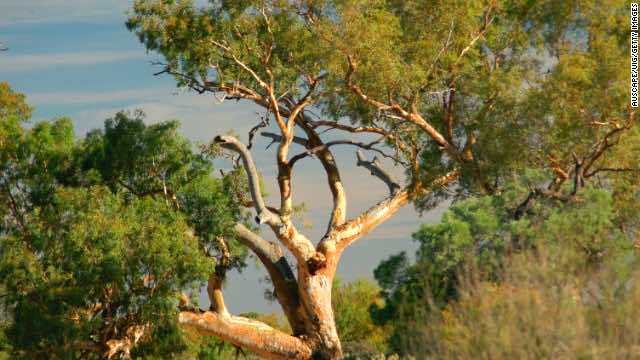 Sydney- Australian researchers have found minuscule nuggets of gold hidden inside the leaves of eucalyptus trees, in a discovery they say could help prospectors discover new deposits of the precious metal.

Scientists from the Commonwealth Scientific and Industrial Research Organisation (CSIRO) made the find in the resource-rich Kalgoorlie region of Western Australia, which was the site of a major gold rush in the late 1800s.

Geochemist Mel Lintern said it appeared the trees sucked up the gold particles from 30 metres (100 feet) below the ground through their roots.

“The eucalypt acts as a hydraulic pump — its roots extend tens of metres into the ground and draw up water containing the gold,” he said.

“As the gold is likely to be toxic to the plant, it’s moved to the leaves and branches where it can be released or shed to the ground.”

In research published in the journal Nature Communications, the CSIRO said the leaf particles themselves would not trigger a new gold rush as they measure just a fifth the width of a human hair and are visible only through advanced X-ray imaging.

Researchers involved in the study estimated it would take the gold from 500 eucalyptus trees to make a single wedding band.

But they said the discovery presented a gilt-edged opportunity to improve the exploration methods used to search for gold, making them more efficient and environmentally friendly.

“This link between… vegetation growth and buried gold deposits could prove instrumental in developing new technologies for mineral exploration,” they said.

New discoveries of gold have fallen by 45 percent in the past decade, while prices have skyrocketed as reserves steadily dwindle — the cost of the yellow metal shot up by 482 percent between December 2000 and March this year.

The CSIRO said scientists could use a technique known as “biogeochemical sampling” to give an indication of the presence of gold.

“By sampling and analysing vegetation for traces of minerals, we may get an idea of what’s happening below the surface without the need to drill,” Lintern said.

“It’s a more targeted way of searching for minerals that reduces costs and impact on the environment.”

He said the method could also be used to find other metals such as zinc and copper.

Nigel Radford, a geochemist who has been involved in gold exploration for decades in Western Australia, said the discovery was a world-first with major implications for prospectors.

“A lot of this stuff has been speculated about for some time, but the identification of the gold particles in the leaf materials is completely convincing and very, very important for the future of mineral exploration,” he told the Australian Broadcasting Corporation.

According to the World Gold Council, more than 174,000 tonnes of gold have been extracted from Earth since the dawn of civilisation.

In 2011, the US Geological Survey estimated there were 51,000 tonnes of gold left in reserve in the world.

Radford said using biogeochemical sampling had the potential to make searching for gold deposits much easier.

“If you can sample on-surface, it saves all the cost and all the time involved in drilling holes,” he said.

Sixty percent of gold becomes jewellery, but it is also a crucial component in electronics and is used in medical technology, including for cancer treatment.