TUNIS - Thousands of opposition activists protested in central Tunis on Wednesday demanding the resignation of Tunisia's Islamist-led government, ahead of a national dialogue aimed at ending months of political deadlock. 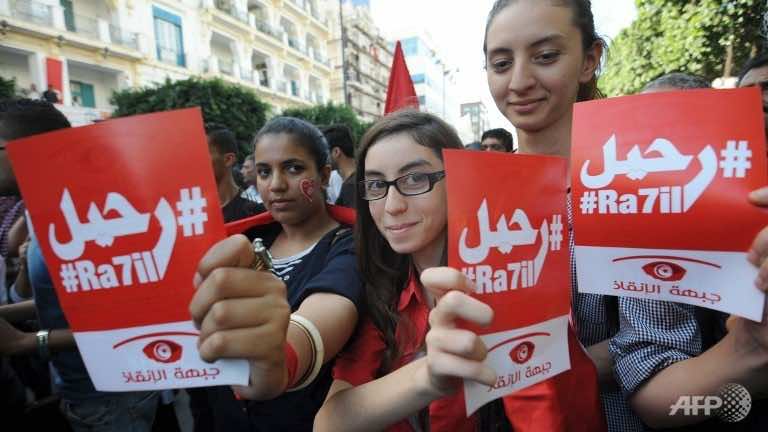 TUNIS – Thousands of opposition activists protested in central Tunis on Wednesday demanding the resignation of Tunisia’s Islamist-led government, ahead of a national dialogue aimed at ending months of political deadlock.

The protesters gathered on central Habib Bourguiba Avenue, waving Tunisian flags and shouting slogans such as: “The people want the fall of the regime”, “Get out” and “Government of traitors, resign!”

A senior interior ministry official told AFP that about 10,000 people had joined the protest.

The demonstration took place amid a heavy security presence, with armoured vehicles and anti-riot police deployed along the central Tunis boulevard, which was the epicentre of the January 2011 revolution that ousted veteran dictator Zine El Abidine Ben Ali.

Some of the protesters then headed to the nearby Kasbah, where the government’s headquarters are located, an AFP journalist reported.

Wednesday’s demonstration came as a hard-won national dialogue between the ruling Islamist party Ennahda and the opposition was finally due to begin.

Mediators hope the talks will bring an end to the political paralysis gripping the country since the July killing of opposition MP Mohamed Brahmi and mark a crucial step in the country’s transition.

Tunisian officials say they expect Islamist Prime Minister Ali Larayedh to announce his commitment to resign ahead of the talks.

“We hope that Larayedh will have enough courage to announce the resignation of his government within three weeks to save the country,” Hamma Hammami, a leader of the Popular Front leftist opposition party, told AFP.

Under the terms of a political roadmap drawn up by mediators, the national dialogue will lead within three weeks to the formation of a new caretaker cabinet of technocrats.

Negotiators will also have one month to adopt a new constitution, electoral laws and a timetable for fresh elections, key milestones in the transition to democracy which has effectively been blocked by wrangling between the Islamists, their coalition allies and the opposition.

A senior member of Ennahda charged on Tuesday that the opposition was preparing to “destroy” the planned dialogue by organising anti-government protests.