Sakher Edris- A group of Bulgarian belly dancers perform at an Arabic restaurant in the capital Sofia to raise funds for aiding a swelling number of Syrian refugees entering the country. 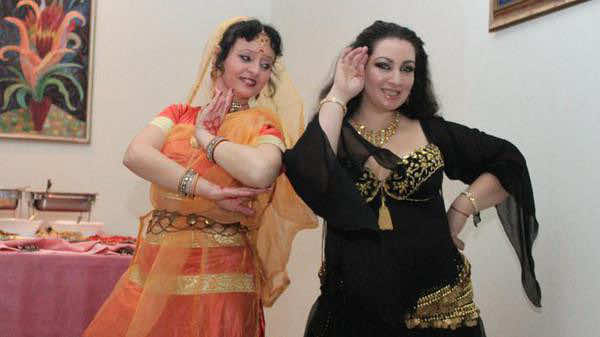 Sakher Edris- A group of Bulgarian belly dancers perform at an Arabic restaurant in the capital Sofia to raise funds for aiding a swelling number of Syrian refugees entering the country.

Amid crowdedness in reception centers, 30-year old belly dancer Karina Zaharieva saw the need to help the refugees cope with their new reality.

Zaharieva said she and eight other belly dancers decided to perform oriental shows at a local Lebanese restaurant and charge an entrance fee, with a quarter of the ticket price going to Syrian refugees.

“They [Syrian refugees] are escaping death in their own country, but are now facing another kind of death because the living conditions in the asylum centers are very difficult,” the Bulgarian woman said.

But so far the dancers have raised $750 with the turnout lower than expected. However, the money raised was used for the medical treatment of a Syrian child and for buying supplies for Syrian families.

“It is true that it is a small amount but my friends and I are very happy that we were able to do charitable work for people who are in dire need of it,” Zaharieva said, adding that she will continue her efforts to raise more money.

Bulgaria has received 2,000 Syrians since the start of Syria’s conflict in 2011, according to the United Nations High Commissioner for Refugees. But, more than 1,670 Syrians have illegally entered Bulgaria this year, according to border police data.