Spain's jobless rate eased slightly to 25.98 percent in the third quarter of 2013, official data showed Thursday, as the eurozone's fourth-largest economy battled its way out of a long recession. 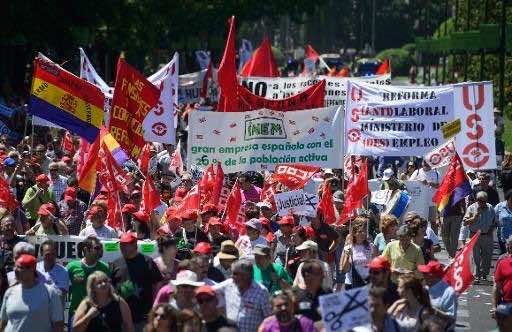 Spain’s jobless rate eased slightly to 25.98 percent in the third quarter of 2013, official data showed Thursday, as the eurozone’s fourth-largest economy battled its way out of a long recession.

The number of people out of work dipped by 72,800 people to 5.9 million, lowering the unemployment rate from the previous quarter’s 26.26 percent, a National Statistics Institute report showed.

It was the second straight quarter showing a drop in the unemployment rate, which peaked at a record of more than 27 percent early this year, and it added to gathering signs that a downturn lasting more than two years has finally hit bottom.

On Wednesday, the central bank said Spain had inched out of its recession with timid 0.1-percent economic growth in the third quarter.

That news sent world stock markets higher as investors hoped for a broader recovery in the eurozone after five years of economic crisis.

The positive data from Spain — which was a focus of anxieties for the eurozone’s stability last year — reflected signs of recovery in European countries hit by the financial crisis, such as Greece, Ireland and Portugal.

France, the eurozone’s second-biggest economy, has confirmed that it exited recession in the second quarter.

A recent estimate by statistics institutes in France, Germany and Italy forecast that the eurozone overall would return to timid growth of 0.1 percent in the third quarter.

Spanish Prime Minister Mariano Rajoy’s conservative government is forecasting an overall economic decline in Spain of 1.3 percent in 2013 before a return to growth of 0.7 percent over 2014.

The International Monetary Fund has warned that Spain’s unemployment rate will stay above 25 percent until 2018 unless Rajoy’s government undertakes deeper reforms.