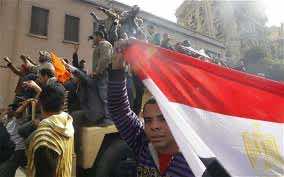 The proposed law, which was drafted by the justice ministry this month and is under review by the cabinet, gives authorities sweeping powers and control over protests and strikes.

The rights groups, including the Cairo Institute for Human Rights and the Egyptian Initiative for Personal Rights, have criticised the law as being “repressive”.

The bill “not only puts draconian restrictions on the right to demonstrate, but imposes other curbs on the right to public meetings, strikes, sit-ins and processions, thus utterly stifling the freedom of Egyptians to engage in all forms of peaceful assembly,” the groups said in a joint statement.

Under the draft, security forces can attend or disperse any meeting on several grounds including the vague “threatening public order”, and obstructing traffic, the groups said.

The law places “only vague curbs on security personnel’s use of excessive force, disproportionate to the actions that might be committed by demonstrators.

It permits security forces to use rubber bullets without restriction, although this ammunition can be lethal,” they said.

Those who violate the law can face up to five years in prison. The law also carries a sentence of up to three years for anyone wearing a mask or face cover during a meeting or demonstration.

The rights groups say the problem has not been with the legal framework for demonstrations, but rather with the way in which security forces have engaged with demonstrators.

Scores of Egyptians have died in clashes with security forces since the uprising in January 2011 that toppled longtime president Hosni Mubarak.

They called on Egypt’s military-installed interim authorities to reform the security apparatus and amend police law, instead of going ahead with a law that would exacerbate political and social crises and which “provides legal cover for assaults on the rights, liberties and lives of citizens”.