Cairo — An Islamist alliance backing Mohamed Morsi on Thursday urged its supporters to protest on November 4 when the ousted president will be put on trial, raising fears of new clashes. 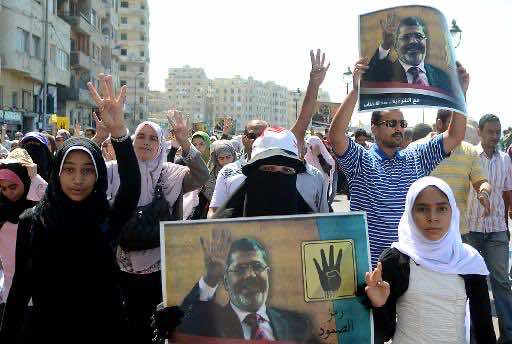 Cairo — An Islamist alliance backing Mohamed Morsi on Thursday urged its supporters to protest on November 4 when the ousted president will be put on trial, raising fears of new clashes.

Morsi –held at an unknown location since the military ousted him on July 3 — and 14 others have been charged in the killing of protesters outside his palace in December 2012.

The Anti-Coup Alliance “notes that the coup organisers would like to break the people’s and the revolution’s will” by trying Morsi and the others, the alliance led by Morsi’s Muslim Brotherhood said.

“The alliance also calls on all free people in Egypt and abroad to stand by the revolutionary will opposing the military coup, and that all activities should be as they always have been — within peaceful bounds that define our methods and strategy.”

Morsi’s trial is expected to raise fresh tensions between the new army-installed authorities and his supporters, who have mounted several protests against the military and its chief General Abdel Fattah al-Sisi.

On October 6, at least 57 people were killed nationwide, mostly in Cairo, when Morsi’s supporters clashed with security forces as they tried to reach Tahrir Square, epicentre of the revolt that toppled Hosni Mubarak in February 2011.

Security forces have been engaged in a sweeping crackdown since breaking up two pro-Morsi sit-ins in Cairo on August 14.

More than 1,000 people have been killed since then, and over 2,000 Islamists — including Morsi and several top Muslim Brotherhood leaders — have been detained across the country.

Prosecutors have charged Morsi with “inciting his supporters to commit premeditated murder” during December 5 clashes outside his palace.

The December fighting erupted when Muslim Brotherhood supporters dispersed a sit-in outside the palace by people angered over Morsi issuing a decree placing his decisions beyond judicial review. At least seven people were killed.

The Brotherhood claimed that most of those killed were Islamists, an assertion disputed by its opponents. At least one of the victims was an anti-Morsi journalist.

Morsi and the co-defendants will stand trial before a Cairo district court.