A Syrian photojournalist working for Reuters was one of three women to receive the Courage in Journalism award from the International Women’s Media Foundation on Thursday. 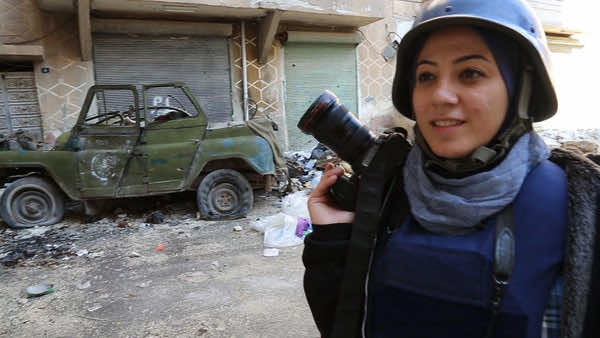 A Syrian photojournalist working for Reuters was one of three women to receive the Courage in Journalism award from the International Women’s Media Foundation on Thursday.

Nour Kelze was unable to attend the ceremony in New York, but spoke about her work in a short video.

Ayubi “has faced direct threats from many sources. Politicians have sent gunmen to her home, anonymous aggressors have vowed to harm her family, and she has been publicly defamed,” the IWMF said at the ceremony.

Phorn, who writes for The Cambodia Daily, “narrowly escaped with her life when the vehicle in which she was traveling came under heavy fire” while she and colleagues were investigating claims of illegal logging, the IWMF said.

An activist traveling with Phorn was killed, the Associated Press reported.

Past winners of the Courage in Journalism award include Helen Thomas, who covered 10 presidents as a White House reporter and died in July aged 92; Marie Colvin, Britain’s Sunday Times correspondent who was one of 28 journalists killed in Syria in 2012; and Anna Politkovskaya, a Novaya Gazeta reporter who was gunned down in the elevator of her Moscow apartment building in 2006.

The IWMF also honored the first black female editor of a newspaper in Zimbabwe, Edna Machirori, with its annual lifetime achievement award.

“I began my journalism career as a teenager, and I’ve never done anything else, this is my life,” Machirori told Al Arabiya Television.

“When you do something, maybe cover a little story, and it has an impact, that’s very satisfying,” she added.

The IWMF said its lifetime achievement award “recognizes a pioneering spirit and determination that has opened doors for women everywhere.”