By Khalid Ibrahim Khaled - Media and foreign observers have become accustomed to see tension rising up in the Western Sahara whenever Western parliamentary delegations or observers are visiting the region. 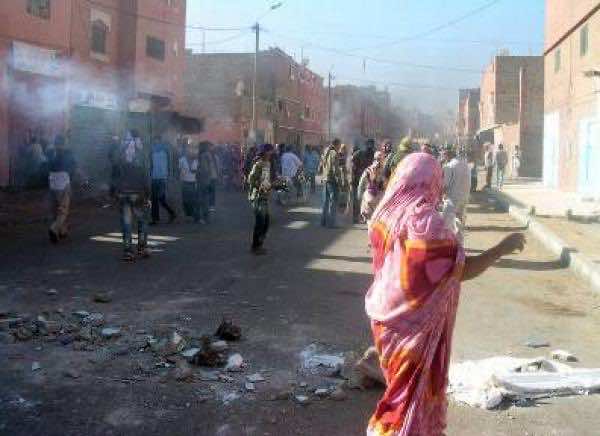 By Khalid Ibrahim Khaled – Media and foreign observers have become accustomed to see tension rising up in the Western Sahara whenever Western parliamentary delegations or observers are visiting the region.

And of course there was no exception during the latest trip of the UN mediator for the Sahara, Christopher Ross, who refrained from making any statement neither on his consultations nor on the unrest that erupted during his visit to Laayoune and Smara.

A US security issues specialist, BDJ, settled in Algiers, explained to “Polisario Confidential” on condition of anonymity, the inside story of the demonstrations.
Polisario leaders, who act under the instructions of the generals and strategists of the Algerian military intelligence services (DRS,) have designed a detailed plan to set the region ablaze on the occasion of the UN envoy’s visit, the US pundit said.

The implementation of the plan on the ground has been entrusted, to a group of people who sneaked in the disputed area. The infiltrators, who received generous compensations in cold, harsh cash, have been instructed to be discreet and to act at night, to avoid being caught on cameras or identified.

And it was during Ross’s trip between Laayoune and Smara that hundreds of young Sahrawis, led by the undercover agents riding 4×4 vehicles, tried to provoke the Moroccan police so that the UN mediator witnesses violations of human rights.

And even more than this, some of the infiltrators, as confirmed by witnesses on the spot, disguised themselves in imitation uniforms of officers of the Moroccan auxiliary forces and police.

These elements, introducing themselves as members of the Moroccan security forces, entered by force in the homes of some pro-Moroccan Sahrawi families, abused the inhabitants and robbed all their valuables.

These elements, who act as troop leaders, regularly travel to Algeria to allegedly attend Polisario meetings, while they actually go there to undergo training and also to receive instructions and action plans, said the US expert.

And of course, they always leave with promises to receive fund transfers to bribe youths and urge them to go to the street and to cover other expenses (fuel, food, propaganda materials etc.)

If the Polisario strategy at Gdeim Izik had managed to attract attention, it was because it took place amidst the social claims of the residents of Laayoune. However, the Polisario’s other attempts to engulf the region have often failed because they are not followed by the civilian population.