TUNIS - A shooting in a Tunis suburb and the threat of an opposition boycott clouded a new attempt on Friday to open crisis talks with Tunisia's Islamist-led government. 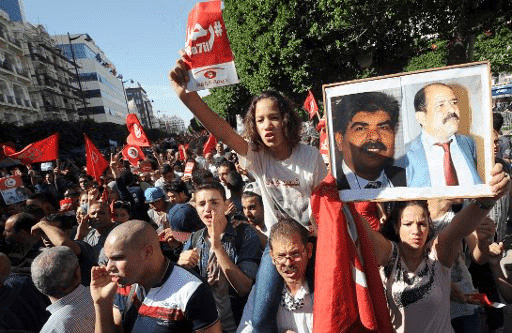 TUNIS – A shooting in a Tunis suburb and the threat of an opposition boycott clouded a new attempt on Friday to open crisis talks with Tunisia’s Islamist-led government.

In the early morning, police shot and wounded a suspected militant in a car in a Tunis suburb, prompting the closure of a nearby college, witnesses and a policeman told AFP.

The shooting came as Tunisia was still marking three days of national mourning for six policemen killed in a clash with suspected militants in the central Sidi Bouzid region on Wednesday.

The interior ministry said one suspect was taken to hospital with bullet wounds while four others were arrested.

It said the men had been travelling in a vehicle which ignored police orders to stop.

Bloodstains were visible on the pavement at the scene, as police with sniffer dogs inspected a vehicle parked near the college to check for explosives.

The college itself was evacuated.

Public anger has been mounting over the death toll from jihadist violence, which saw two offices of the ruling Islamist Ennahda party torched on Thursday as six slain police officers were laid to rest.

The failure of the Islamist-led government to rein in militants has been one of the principal grievances of the mainly secular opposition, which has boycotted work on drawing up a new constitution since the killing of one its MPs by suspected jihadists in July.

The government has admitted it has struggled to contain the militants but blamed a lack of resources.

Mediators said they would make a new attempt to launch the long-awaited national dialogue on Friday despite doubts over whether the opposition would attend.

Previous efforts to launch the talks already failed on October 5 and 23.

“The national dialogue launch will go ahead at 10:00 am (0900 GMT),” said the UGTT trade union confederation, which has been the lead mediator in the protracted political crisis, just hours before the planned start.

“We will see which parties turn up.”

The opposition said on Thursday evening that it would not take part until Islamist Prime Minister Ali Larayedh gives a “clear and explicit” undertaking that his government will step down within three weeks of the dialogue’s launch.

The timeframe is part of a hard-won roadmap to end the crisis brokered by the mediators between the Islamist-led government and the opposition.

But the roadmap also sets a parallel one-month timeframe for the adoption of a new constitution and electoral laws, and a timetable for fresh elections, which the government is insisting must also be adhered to.

Larayedh gave a new commitment on television late Thursday to the principle of handing over to a government of independents, but again insisted his
cabinet’s resignation was conditional on the implementation of other parts of the roadmap.

“The government is eager and committed to stand down within the timeframes set by the roadmap but on condition that all its elements are completed in the specified order,” the premier said.

There was no immediate response from the opposition to Larayedh’s latest comments, which came after a statement on Wednesday night failed to satisfy their demands.

One major opposition faction, the Nidaa Tounes party of ex-premier Beji Caid Essebsi, an outspoken Ennahda critic, said Thursday that only a written committment to the three-week deadline from the government would persuade it to join the dialogue.