Tens of thousands of people rallied in Taiwan on Saturday in Asia's largest gay parade, organisers said, as the island's parliament was set to review a bill on same-sex marriages. 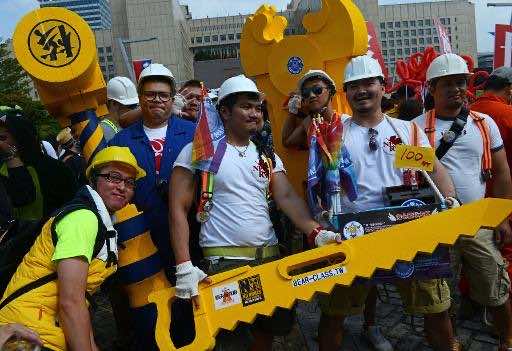 Tens of thousands of people rallied in Taiwan on Saturday in Asia’s largest gay parade, organisers said, as the island’s parliament was set to review a bill on same-sex marriages.

“This year’s theme is ‘The voice of sexual sufferer’, which was the main appeal for our very first parade. We want to show support for those who are still suffering or being discriminated against for their sexualities,” said Albert Yang, a spokesman for the event.

The rally came as Taiwan’s parliament on Friday decided to begin reviewing a bill to amend the Civil Code in order to allow same-sex marriages. The bill, proposed by opposition Democratic Progressive Party lawmakers, will be discussed by the parliament’s judiciary committee.

“For me legalising same-sex marriages is the most important issue because it will mean a big step forwards for equal rights. I hope the parliament will pass the bill soon,” said Chang Hsiao-mao, a 24-year-old service industry worker who came with 200 others he met on Facebook.

Gay and lesbian groups in Taiwan, one of Asia’s more liberal societies, have been urging the government for years to make same-sex unions legal.

The advocacy group, Taiwan Alliance to Promote Civil Partnership Rights, which drafted the bill on legalising same-sex marriage and civil partnership, has said it was optimistic as public support in Taiwan has been growing amid a global trend to recognise such unions.

Last year, around 65,000 gays and lesbians and their supporters marched in Taiwan in a record turnout to push for legalising same-sex marriage, according to organisers.

However, the campaign suffered a setback in January when Chen Ching-hsueh and partner Kao Chih-wei dropped their appeal to an administrative court against a government agency which had rejected their marriage registration in 2011.

Chen said he had “lost his faith in the judiciary” but added that death threats to him and his parents via Facebook had been among factors prompting him to abandon the appeal.