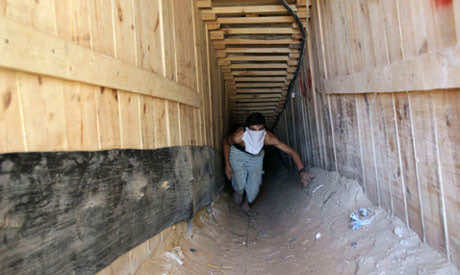 The “closure of the tunnels caused heavy losses to the industry, commerce, agriculture, transport and construction sectors” of around $230 million monthly, said Hatem Oweida, deputy economy minister for the Islamist movement Hamas that governs the strip.

Essential materials were for years smuggled from Egypt into Gaza through tunnels, bypassing Israel’s blockade, but the Egyptian army recently destroyed many of those after ousting president Mohamed Morsi of the Muslim Brotherhood, a Hamas ally.

Oweida said that the coastal Palestinian territory had relied on the tunnels to meet at least 40 percent of its construction supplies and raw material needs.

He added that “public revenues saw a decline after the closure of the tunnels and the tightening of the siege in the second half of 2013,” which he said would hit Hamas’ employment and temporary work programmes.

Israel first imposed its land, sea and air blockade on the coastal strip in 2006 after militants there seized an Israeli soldier.

It was further tightened in mid-2007 when Hamas took control of Gaza.