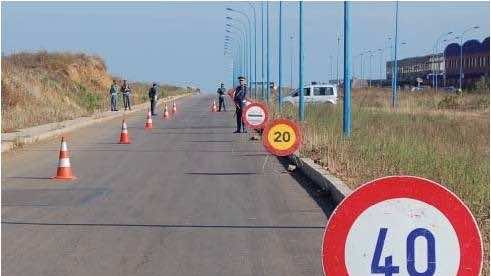 Rabat- A law official is the first person to make sure that the law is not broken. However, the story of this law official who escaped a checkpoint and tried to run over a traffic policeman is definitely an exception to this rule.

The incident took place on Friday in the capital city of Rabat when a law official crossed a red light and did not slow down despite the fact that a checkpoint was implemented in the area, reported Al Massae newspaper in its issue of Monday October 28.

As soon as the infraction was committed, a call had been launched to other patrols to stop the fugitive official. Minutes later, the car was pulled over and the verification process began. To their amazement, police officers found out as they were verifying the official’s ID that he was no one else but a prominent judge in the city.

“Either you step aside, or I will crush you,” the judge threatened the police officers.

The judge started to throw insults and threatens police officers in front of bystanders to put them in prison after they “dared” to pull him over, according to Al Massae. The enraged law official then tried to drive his car away missing by few centimeters a police officer that was going to be ran over.

The same source said that high-ranking officials quickly intervened to close the case and to convince police officers to forget what happened after they insisted to will file a suit against the judge.