Looking for love can’t be too hard when you can see for miles around. 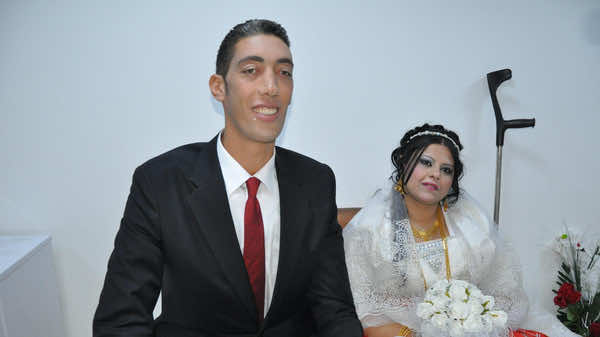 Looking for love can’t be too hard when you can see for miles around.

Sultan Kosen, a Turkish farmer, is 2.51 meters high – the tallest man in the world.

But the 30-year-old had reportedly given up trying to find a life partner until he met Merve Dibo, who stands at a comparatively small 1.73 meters.

“Now I will have my own family and private life,” said Kosen, who is engaged to Dibo.

“How unfortunate I could not find a suitable girl of my own size,” said Kosen, according to UK newspaper The Daily Mail. “I believe I’ve found the person for me.”

Kosen enjoys near-celebrity status in Turkey, and has invited numerous politicians to his wedding in the country’s southern city of Mardin, where he will marry Debo wearing an enormous custom-made suit and shoes.

His only other desire is a car big enough for him to drive around in with his bride.

Kosen suffers from pituitary gigantism, which causes the over-production of growth hormone. His condition is thought to have be caused by a tumour in his pituitary gland.

Although he continued to grow for some after doctors removed the tumor, his height has leveled out.

His family is reportedly of a regular height.

While he has been teased of his height, Kosen claims that he is now “proud” to be as tall as he is.

Kosen also holds the Guinness World Record for the size of his 27.5cm hands and feet, which have been measured at 36.5cm.