ANKARA - Top refugee co-ordinator Amin Awad warns that Syrian refugee numbers, which are already two and a half million, could reach five million in next year. 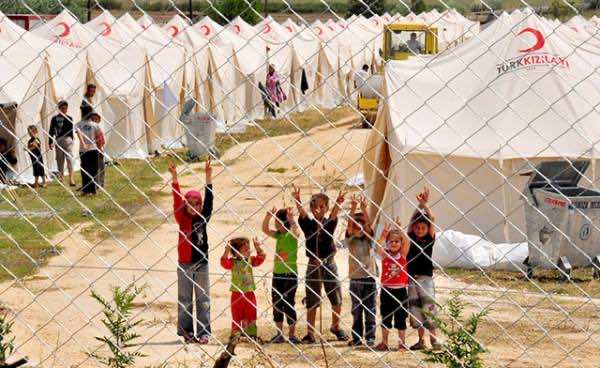 ANKARA – Top refugee co-ordinator Amin Awad warns that Syrian refugee numbers, which are already two and a half million, could reach five million in next year.

The over half a million Syrian refugees in Turkey are in the process of being registered, which is the first stage of proper targetting of humanitarian aid to them, says Amin Awad, UNHCR Coordinator of Middle East and North Africa, in an interview with AA.

Giving the latest figures in Syria, Amin Awad said, “the estimate that we have inside Syria is about 4-5 million displaced people. As you know, it is difficult for humanitarian agencies to access some areas,” and he added those people are in crucial problems by saying “the needs are tremendous, there is need for health, education, food, services such as water, electricity, waste management, and above all of course security and protection for these people who are now internally displaced, moving from one place from another”, he stated the half of these are children.

Concerning the rising refugee numbers, Awad predicts there may be 2 million more Syrian refugees in 2014 in neighbouring cuntries, which means there will be 5 million refugees in total for neighbors, unless there is a peace agreement, a change in climate and security situation on the ground, and unless there are better conditions inside Syria.

“For that, we are trying as much as possible, we are asking for access in Syria, ceasefires and humanitarian pauses so that our relief trucks can go through and assist people in their localities. Above all, I think these people need protection, services, food, water, health facilities and security and they need to be shielded from this fighting, shelling, bombardments. Unless really peace is restored in some areas of Syria, we will see a lot of movement inside and outside Syria,” Awad indicates their sensitivity on subject.

Awad said they are working on the Regional Response Plan for the refugees in surrounding countries of Syria and it will be launched in December 2013.

Optimist in will, cautious in mind

As on side of the peace process, UNHCR director expressed his optimism about Syrian regime by keeping the cautious.

“There is an atmosphere of optimism, but it is a guarded optimism. There is Geneva-2, there was the Security Council a few weeks ago that united the members of the council to take some decision and there was a presidential statement of the Council on humanitarian assistance and that’s being translated into action. So there are a lot of positive signs and I hope that these positive developments and optimism continue.” Awad said, adding, “I really do believe that we should keep humanitarian issues on the agenda of the international community, of the Security Council, of the regional mechanisms, to make sure that this issue facing the surrounding countries and Syria itself are on the agenda and are being addressed in a robust manner.”

Amin Awad made explanation about the humanitarian corridor also to take a concrete step to deliver aid to those in need inside Syria, “the corridor from Jordan is open. We are shipping most of our supplies from Jordan to Syria. We are also shipping supplies by sea to Latakia.” and also assessed any other corridor option, “It depends on neighboring countries and their agreement with Syria.”

Regarding the pressure over host countries, Awad says “The officials have already made some assessments on the needs among communities, or local governance and municipalities and how to articulate these needs to the international community. But also, I think the Turkish government itself is taking steps to contribute to this.”

Awad specifically thanked to Turkey by stressing, “They have already invested about 2.2 billion USD in humanitarian action. We are very grateful to the Turkish government and Turkish people for hosting these refugees, for adhering to international standards and obligations under international law, for keeping the borders open and letting refugees come as they flee a war.”

“Turkish government says that there are about 660,000 refugees now, of course there may be some other refugees that may need to be registered yet, so I think one of the challenges the Turkish government will face now is to make sure that as soon as possible registration, mobile stations and centers are established so that every refugee is registered. That will be good, because then we will be able to determine vulnerabilities, will be able to break down the population of the refugees by location, by gender, by age and also identify the vulnerabilities, the size of families among those refugees and then it will be easier for the government and for us to really target the delivery of assistance to these refugees,” Awad mentioned the challenges that Turkey faces.

Awad appreicated the efforts of Turkish FM Davutoglu about the criticism on lack of reference to humanitarian crisis in the UN Security Council resolution, “Turkish Foreign Minister worked very closely with the UN High Commissioner for Refugees. There was a meeting on September 30, a high level meeting where the Turkish Foreign Minister participated together with the foreign ministers of surrounding countries. It was a very positive meeting and there were some commitments made, as keeping borders open, as the need for burden-sharing, measures to offset the pressure of the presence of refugees on communities and governments,” and he remarked Turkey’s position in the crisis, “I am very grateful to the Turkish government and Turksh people and I hope that the government will keep the border open, keep receiving refugees and we also from our side will try to mobilize support in the name of burden-sharing and do our part.”