Over 150 years ago, Ottoman Sultan Abdülmecid I sketched a drawing of building an underwater tunnel to connect his vast empire to Europe. 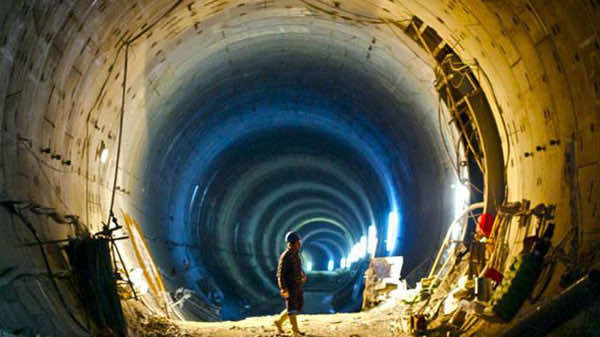 Over 150 years ago, Ottoman Sultan Abdülmecid I sketched a drawing of building an underwater tunnel to connect his vast empire to Europe.

However, the lack of technology and financing at the time prevented him from fulfilling his vision.

On Tuesday, the sultan’s plan will finally be realized as Turkey opens the Marmaray rail tunnel linking the historic city’s European and Asian sides.

“Our ancestors worked on [the tunnel project]. It fell to us to realize it,” said Turkey’s Prime Minister Recep Tayyip Erdogan, according to news website Middle East Online.

While the tunnel will officially open on Tuesday, the rail tunnel will not be fully operational yet.

Officials at a press conference said that the tunnel has maximum capacity of 1.5 million passengers a day, and is expected to alleviate one-fifth of Istanbul’s congested traffic, according to Turkey-based Hurriyet Daily News.

Erdogan kick started plans for the tunnel in 2004 as one of many ambitious city projects including a third bridge, a parallel canal, and a third airport.

The tunnel’s construction was scheduled to take four years, but was struck with a series of delays when a series of historic artifacts were found at the site.

In June, a wave of anti-government protests swept the country, focusing on Istanbul, with local residents saying that the urban development plans were causing precious green spaces in the city to be lost.