Madrid- Barcelona can build on their win over Real Madrid in El Clasico on Saturday by moving nine points clear of Los Blancos when they travel to Celta Vigo on Tuesday. 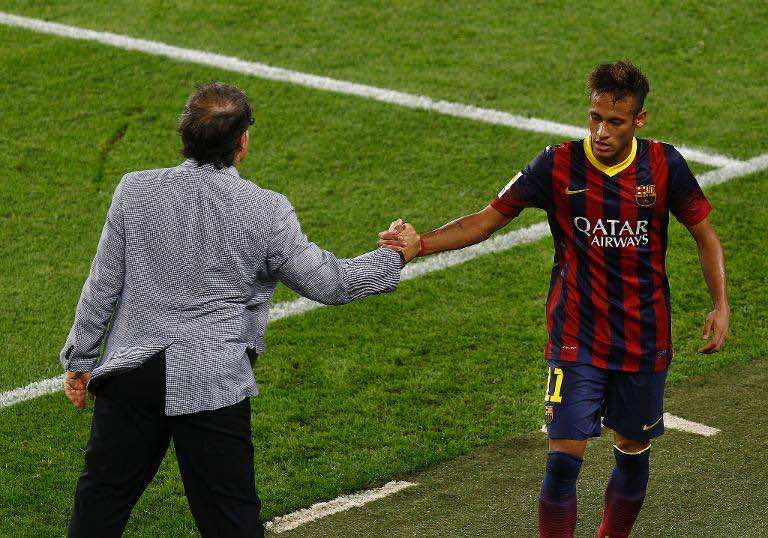 Madrid- Barcelona can build on their win over Real Madrid in El Clasico on Saturday by moving nine points clear of Los Blancos when they travel to Celta Vigo on Tuesday.

The Catalans’ 2-1 win gave them a healthy six point cushion over Madrid with Atletico Madrid just a point behind in second.

However, despite dropping just two points in their first 10 La Liga games, Barca coach Gerardo Martino refused to concede that his side are already well on their way to retaining their title.

“There is still 60 percent of the league to go and Madrid and Atletico are close. They can still cut the gap.

“Right now it counts for our confidence more than mathematically.”

Neymar was the star of the show for Martino’s men at the weekend as he scored the opening goal and then teed up Alexis Sanchez to seal the points with delightful chip over Diego Lopez 12 minutes from time.

Lionel Messi’s impact on the game though was somewhat restricted by his positioning on the right side of the Barca attack.

The World Player of the Year is expected to return to his normal role as a false nine at Balaidos with Cesc Fabregas dropping back into midfield.

Sanchez is also expected to start after his positive impression as a substitute and with the Catalan derby against Espanyol just three days away, Martino is likely to rotate his side heavily with Xavi, Andres Iniesta and Gerard Pique likely to be handed a rest.

Celta enjoyed arguably an even better weekend as they picked up just their second win of the season by hammering Malaga 5-0 away from home on Saturday.

The Galicians are coached by ex-Barca favourite Luis Enrique, who was linked with the Barcelona job when Martino was hastily appointed following Tito Vilanova’s unfortunate resignation due to ongoing cancer treatment in July.

And another former Barca man Andreu Fontas believes Celta have nothing to lose against his former club.

“The Malaga game was one we all needed, just as much the team as the fans. This victory boosts our confidence and helps us to believe in what we are doing.

“Now we have to think about the game on Tuesday against Barcelona, they are a very difficult opponent but we have to try and surprise them. We have very little to lose and a lot to gain.”

Real Madrid will have the chance to make up some ground on Wednesday when they host Sevilla at the Santiago Bernabeu.

After a disappointing first-half display at the Camp Nou, Madrid improved mightily after the break and could count themselves unfortunate not to come away with a point as Karim Benzema struck the bar and Cristiano Ronaldo had a strong penalty appeal waved away.

Coach Carlo Ancelotti was encouraged by his side’s response after the break and believes it was a sign of their continuing improvement after positive displays against Malaga and Juventus.

“We obviously wanted to win that match, you never like to lose, and it was an important game.

“But we are improving, the Barcelona game showed that again.”

Gareth Bale made just his second start in a Madrid jersey at the Camp Nou but was largely ineffective before being subbed by Benzema on the hour mark.

The Welshman is though expected to get his first start at the Bernabeu as he tries to build on his match practice after a series of niggling muscle injuries.

Atletico, meanwhile, have to wait until Thursday until they are back in action as they travel to Granada.

Diego Simeone’s men recovered from their first defeat of the season last weekend by smashing struggling Real Betis 5-0 at home on Sunday with La Liga’s top-scorer Diego Costa once again on target.