CAIRO - The three judges presiding in the trial of Muslim Brotherhood chief Mohamed Badie and his aides withdrew from the proceedings on Tuesday, citing "reasons of conscience". 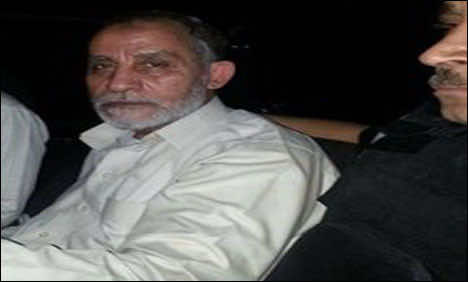 CAIRO – The three judges presiding in the trial of Muslim Brotherhood chief Mohamed Badie and his aides withdrew from the proceedings on Tuesday, citing “reasons of conscience”.

Badie and his two deputies, Khairat al-Shater and Rashad al-Bayoumi, face charges related to the deaths of protesters who stormed the Brotherhood’s Cairo headquarters on June 30.

“The judges are retiring from this case for reasons of conscience and the accused must remain in detention,” head judge Mohammed Fahmy al-Qarmuty told the court at the start of the session.

Lawyer for the accused Mohamed Damaty insisted “there is no evidence at all in the case” and told AFP that the proceedings were “political”.

A total of 32 other defendants are being prosecuted along with Badie, Shater and Bayoumi. None of the 35 were in the court on Tuesday, when the second session of their trial began.

An official told AFP that the defendants were not brought to the court for security reasons.

Badie, Shater and Bayoumi face charges of “inciting” the murders of nine protesters on June 30. If found guilty, they face the death penalty.

Three other of the accused Islamists also face murder charges while 29 are charged with participating in violence.

Millions of protesters on June 30 called for the ouster of former president Mohamed Morsi, accusing him of working for the sole benefit of the Brotherhood and of ruining an already dilapidated economy.

The army on July 3 ousted Morsi after the mass protests against his one-year rule. He will face charges of incitement to murder in a trial beginning on November 4.