SOUSSE - Failed suicide bombings in Tunisian resorts sparked fear Thursday among residents concerned for their livelihood, but tourists largely brushed off the attacks as they flocked to the beach. 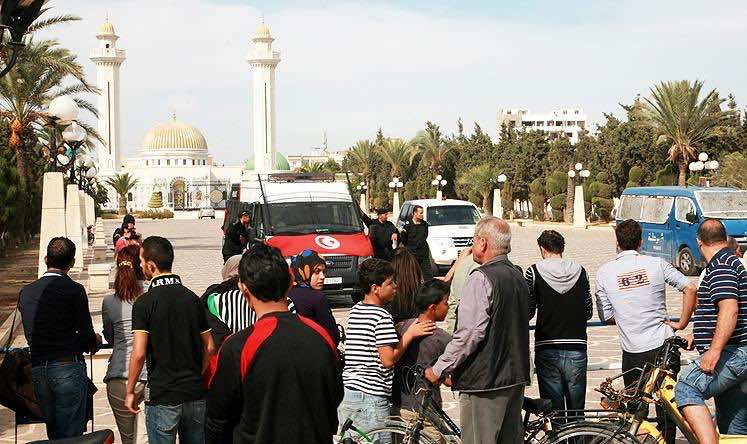 SOUSSE – Failed suicide bombings in Tunisian resorts sparked fear Thursday among residents concerned for their livelihood, but tourists largely brushed off the attacks as they flocked to the beach.

A day after Wednesday’s attacks police, national guardsmen and soldiers descended on the coastal town of Sousse, patrolling the streets and stopping motorists to search their cars.

Security forces were also deployed outside supermarkets and shopping centres as part of a formidable operation to safeguard the country’s vital tourism industry.

“These controls will be round the clock from now on all over Sousse,” an officer, who declined to be named, told AFP.

The heightened security is evident as one approaches El Kantaoui, a luxury resort and port for yachts, where national guardsmen are deployed at roundabouts to check vehicles.

El Kantaoui is north of Sousse and only 10 kilometres (six miles) from the beach where a suicide bomber blew himself up in a botched attack before authorities foiled another suicide bombing in neighbouring Monastir.

Wednesday’s attacks have fuelled fears about the future of the country’s tourism sector, still struggling from the 2011 revolution, which resulted in a 30-percent drop in revenues.

Already reeling from political instability sparked by the murders this year of two prominent politicians and a rise in violence attributed to jihadists, the Islamist-led government has repeatedly insisted that tourism is safe.

On Thursday tourists appeared to agree with that assessment as they jogged along the beach, took rides in horse-drawn carriages, sunbathed or practiced waters sports, enjoying the warm October weather.

“Yesterday I was scared, frankly. But I think such incidents are mostly a threat to Tunisia. The weather here still attracts us, and I’m determined to finish my holiday,” Aurelie, a French tourist, said as she walked her dog.

Michele, another French holidaymaker lying on the beach, was also determined to see out her holiday. “I don’t want to think too much and ruin my vacation,” she said.

Waiter Billel Toumi said he could not forget Wednesday’s events that easily.

“Tourism has been targeted. We have been targeted,” he said. “We are not afraid for our own lives, but we must be able to work to feed our families.”

Tourism accounts for a sixth of the workforce in Tunisia, according to the head of the National Tourism Office Habib Ammar, who was promoting his country at the Berlin tourism fair in March.

But Tunisia has been struggling to woo tourists put off by the political turmoil across northern Africa.

Figures released by the tourism ministry in mid-October showed the hotel occupancy rate for the first nine months of 2013 was 1.4 percent less than in 2012 and 15.7 percent lower than in 2010.

The head of the French travel operator Selectour Afat (AS Voyage) Jean-Pierre Mas told AFP it was too soon to say if the attacks will have consequences on tourism in Tunisia.

“Yesterday’s attacks… did not have measurable consequences. There are no cancellations. We cannot yet say today if the attacks affected bookings,” said Mas.

“Globally the situation in Tunisia is worrisome from the economic point of view: tourism has dropped by 30 percent since the Arab Spring, it did not take off this summer, the political instability and now the attempted attacks targeting tourist zones are not favourable to the redeployment of tourism in Tunisia.”

The porter of the four-star Riadh Palms hotel, the apparent target of the first attack, agreed.

“We were already living through very tense times, and since yesterday’s incident we are living in fear,” said the porter, who declined to be named.

“We are scared to death.”