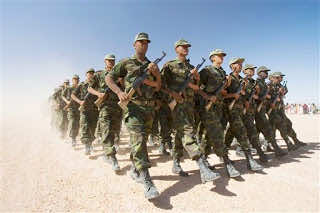 Rabat- Moroccan military helicopters have been reported to comb the border area with neighboring Algeria following the latter’s decision to reinforce its presence along the shared borders by putting more boots on the ground, according to Al Massae daily in its issue of Friday November 1st.

Units from the Royal Armed Forces and auxiliary forces had been deployed to the borders after receiving instructions to stay vigilant and alert in dealing with the recent escalation from Algeria.

The relation between Morocco and its neighbor deteriorated  after the speech of Algerian president in Abuja on Monday, which contained allegations concerning the situation of human rights in the Sahara.

The Algerian President called on the United Nations to expand its mission in the Sahara, known as MINURSO, to monitor the situation of human rights in this disputed territory. Algeria’s President statement was considered by Rabat as “provocative and hostile”.

As a result, Morocco announced on Wednesday its decision to recall its ambassador in Algiers for consultation.

The Moroccan Army is increasing alertness along the shared borders after it gathered new information that Algeria is conducting joint military exercises with the Polisario front militias using live ammunition and focusing mainly on tactics of guerrilla warfare, according to a source quoted by Al Massae.