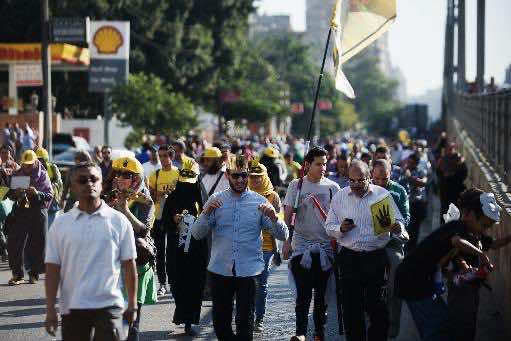 “The mass rally on Monday… should be outside the (Police Officers’ Academy) building in Tora,” the Anti-Coup Coalition, which is led by Morsi’s Muslim Brotherhood, said in a statement.

The Coalition, which demands Morsi’s reinstatement, also called for rallies across Egypt starting on Friday.

Interior ministry officials say 20,000 policemen will be deployed on Monday to guard the south Cairo academy hosting the trial and to secure Morsi’s transport to the makeshift court room.

Morsi, held at a secret location since the military overthrew him on July 3, is charged with inciting the murder of protesters outside his palace in December 2012.

He is to be tried along with 14 other defendants.

The Islamist’s supporters have been battered by a police crackdown since his ouster. About 1,000 people have been killed in clashes and more than 2,000 arrested.

The campaign of arrests of Islamists has left much of their leadership in jail and restricted their ability to organise mass protests.

The Anti-Coup Coalition says it believes in peaceful protest, but it has not shied away from confronting the police.

On October 6, almost 60 people were killed in clashes when the Islamists tried to march on Cairo’s Tahrir Square while the military and its supporters commemorated Egypt and Syria’s 1973 war with Israel.